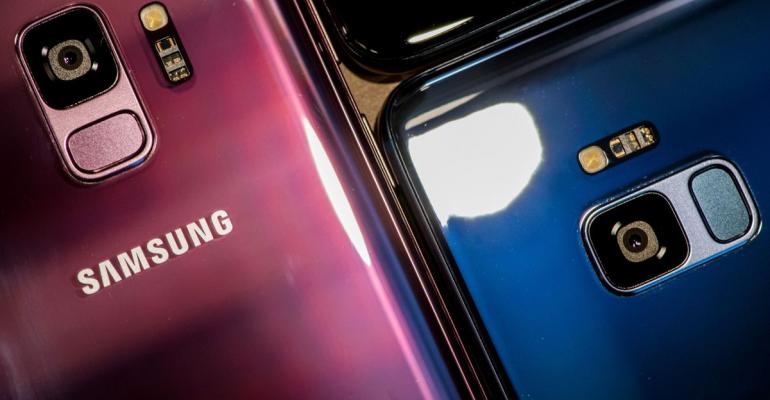 How Samsung’s New Galaxy S9 Compares to the iPhone X

Samsung needs to show it has the hardware and software chops to maintain its leadership in the Android market, while proving Apple isn’t king of smartphone design.

(Bloomberg) --When Microsoft revealed a replacement to Windows 8, it skipped the number 9 and went straight to Windows 10. Apple’s iPhone 8 was followed by the iPhone X (pronounced “ten”). But Samsung refused to follow: The successor to its Galaxy S8 is the Galaxy S9 (and a larger S9 Plus), and it’s coming out in March.

The phone is critical for the company. Samsung needs to show it has the hardware and software chops to maintain its leadership in the Android market, while proving Apple isn’t king of smartphone design. Then there’s fending off rising Chinese competition from Huawei and reassuring investors that Vice Chairman Jay Y. Lee has the company’s future under control since his legal woes commanded global headlines.

But above all, Samsung needs to be better than the iPhone X in the eyes of consumers. Here’s how they compare.

Great pictures are essential for any top-end phone. Samsung has equipped the S9 Plus with two cameras: a wide-angle, and a telephoto (like the iPhone X) and both capture at a resolution of 12 megapixels (also like the iPhone X). Samsung even mounts the two lenses of the S9 Plus vertically — something Apple also does with its flagship.

But the big difference may come with low-light performance. When you take a picture with the S9, you actually capture 12 images simultaneously. The phone then compares all exposures to create a single shot that includes all the detail you want, but with as little grain and noise as possible. It’s similar to how the iPhone X processes high-dynamic range photos, taking three images at different levels of light exposure to combine them to produce a richer, more balanced image.

Samsung’s decision to expand this technology in the S9 complements the physical camera lens, which has a wider aperture to let in more light — an f1.5 aperture compared to Apple’s f1.8. In the camera world, that small change can make a big difference.

Most features are the same across S9 and S9 Plus models, aside from the camera system. But the latter version is larger: it uses a 6.2-inch display compared to the regular S9’s 5.8-inch offering. The large and small variants weigh 189 grams and 163 grams (a little under six ounces) respectively.

The iPhone X weighs 174 grams — right in the middle of Samsung’s two models. But the screen is one big difference. Apple’s famous “notch” atop the iPhone X’s display is not something Samsung adopted. Instead, the S9 screen is an uninterrupted rectangle. The bezels at the top and bottom of the display are thin, but Apple’s are thinner. Consumers will have a choice: slimmer bezels but with a notch, or no notch but slightly larger bezels.

In the U.S., Samsung will equip the Galaxy S9 with Qualcomm’s latest and greatest system-on-a-chip, the Snapdragon 845. On paper, it includes a CPU that runs at speeds up to 2.8GHz and has eight processing cores. In other regions, such as Europe, Samsung will use its own Exynos processor, not Qualcomm’s.

Until the phone gets released for review it’s impossible to say how well the Galaxy S9 will perform compared to its own international variant, let alone to the iPhone X. Apple’s phone uses its own A11 Bionic chip, which runs at up to about 2.4GHz, using six processing cores. But historically Apple’s custom-designed silicon, its integration with the iOS software it powers, together with the rest of the hardware in the phone, has given it the edge over competitors whose numbers, on paper, appear greater. What’s safe to say is that both phones should handle anything realistically thrown at them.

Apple has never let customers expand internal storage of the iPhone with removable SD memory. But Samsung does with the S9. It’ll have 64GB built in, but it supports Micro SD cards with up to 400GB of additional capacity. Apple will sell you up to 256GB of internal storage when you choose an iPhone X, but after that you’ll need to rely on cloud-based file-hosting, such as iCloud or Dropbox.

But Apple users will most likely still feel their iPhone X hardware is in the lead, as Samsung is continuing to use fingerprint sensors and iris scanning for unlocking the latest Galaxy. That isn’t thought to be as sophisticated as Apple’s system, which maps the contours of a human face to identify an individual and was deemed secure enough to no longer require fingerprints at all. Samsung, instead, also includes a fingerprint reader on the rear of the phone.

Samsung has also taken the idea of Apple’s animated emojis, which use the front-facing camera to let users animate facial features of a unicorn and more by moving their own face. Samsung is introducing a similar feature with the S9, but rather than using existing emojis it will let you create an avatar of yourself and animate that instead. These can be shared as videos of animated GIFs via email or text message.

These phones are the most expensive flagships either has made within their categories, and on paper they share remarkable similarities. Aesthetically, there’s a bigger difference between an iPhone 8 and an iPhone X, particularly in terms of raw industrial design, screen size and display quality. Samsung’s S9 offers less of a noticeable upgrade physically compared to the S8, but improved photographic features and raw horsepower will be key selling points to potential upgraders.

As for the customer on the fence over whether to defect from one manufacturer to another, it’ll be a trade-off between screen format and bezels, expandable storage, low-light photography and physical look and feel. Elsewhere we’re still in the realm of very attractive slabs of glass and metal, despite record highs in cost.