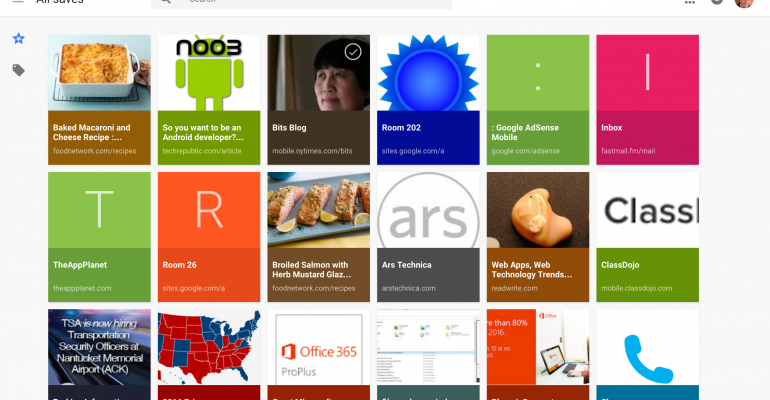 How To: Making Sense of Google’s New Tools to Reign in All Your Saved Links

Google recently went on a major productivity spree and upgraded two of its primary productivity tools, partnering them up with fresh Chrome extensions.

But as usually happens with Google apps, there’s a little bit of overlap when it comes to all those new features. The overall goal is clear: Google is finally giving you a system for saving stuff on the web, which had been sorely lagging. But the actual workflow isn’t completely straightforward given that there’s some duplication of service going on here.

Let’s take a deeper dive into Google’s solutions and how they may work best for you.

FIRST: SAVE HERE, SAVE EVERYWHERE

First, let’s take a look at what’s new. With Inbox, Google’s rethink of email, the app now has a Chrome extension that allows you to save a link directly into the application. It then moves to the top of your, well Inbox, as a reminder for you to read later.

This also works on mobile: whenever you copy a link, you’ll see a neat little icon right above the floating action button. Just insert the link and it’s ready for sharing or later reading.

Use Inbox as the hub for your saved link.

A similar capability came to Google Keep, which is the company’s not-quite-yet Evernote and OneNote competitor. You can use an extension to save links, which can also be quickly categorized by labels with hashtags.

Your notes are then at the ready on desktop or the iOS/Android apps. But Google didn’t stop there. About a week before the Inbox and Keep upgrades, the company launched a new Save to Google extension to put your favorite links to yet another place.

Google’s new ‘Save to Google’ tool is a cross between bookmarks and one of the popular save-it-later services.

It’s like a lighter version of Pocket married to a splashy bookmarks menu. You can tag items and search to find them quickly, though unlike Pocket or other tools the links just take you to the site directly, which means putting up with load times and oppressive advertisements. It’s really good for organization and of course uses Google’s search capabilities well, but what you can do with it right now is a little limited.

So after about a week going hog wild with all these tools, I had more links, in too many places, than I knew what to do with. I found if you want a link to read later that day or perhaps share with a colleague, your best bet is to use Inbox.

Google Keep is best for an article that is part of work, research, or something else you might need in the future for a productivity purpose. I look at it akin to  clipping an article to OneNote or Evernote. The hashtags are really useful here, so you can quickly assign a label for later reference. But those Post-it style notes can fill up the interface quickly and become unruly, so you should constantly color code them or organize by labels to keep things straight.

Google Keep’s new Chrome extension lets you easily save all those articles you want for research or casual reading.

Inbox worked great if I wanted to share the article - it’s right there and you can easily fire it off to a colleague or family member. But if a ton of links roll up in your Inbox, it’s just one more piece of clutter you have to manage.

On the desktop I find myself using the Save to Google extension the most: this way I know where all the links are and have an easy-to-figure out interface for finding past articles. The only downside is there isn’t a strong mobile link, whereas Inbox and Keep have integration with saved links in the mobile apps Android and iOS.

THIRD: HOPE FOR SOME REFINEMENT

Where I find these tools lacking is that you can’t save, mark up, highlight, or view any of these articles offline like you can with OneNote or Evernote. The dream world where there’s ubiquitous LTE or Wi-Fi just isn’t here yet.

If Google really wants this to be a service that replaces those or Pocket for one’s productivity, these need to be a next step. The problem is that step doesn't feel into Google’s profit motive: the company still makes the bulk of its revenue from online advertisements.

Such advertisements are also the lifeblood of publishers, who have taken quite a hit with content moving off the web into proprietary services and with so many readers embracing ad blockers. And the seeming A/B testing with these services do give you a lot of choice about how to use them. Google is also very good about iterating such products over time to learn from your preferences.

These tools are actually great upgrades if you’re someone who goes all in with Google for your productivity. And that’s where clearly Google is going: making the company's ecosystem attractive enough to perform for your entire workflow across any device that you have.