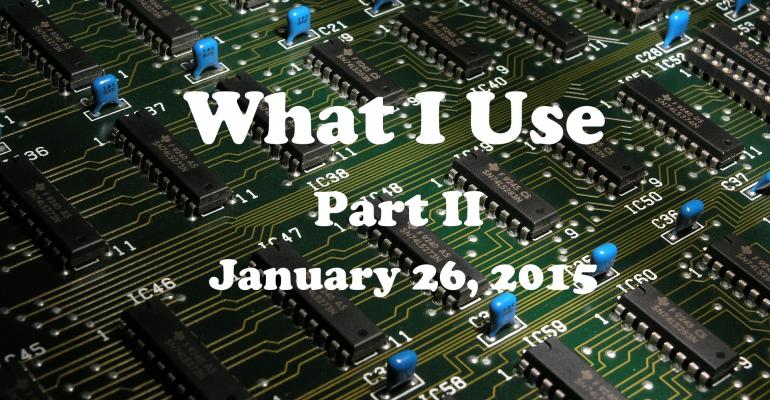 The Hardware I Use (Richard Hay) Part 2

Last week I shared with you the first part of the hardware I use in my desktop computer, my companion/travelling device and my smartphone of record.  Those items, by far, are the bread and butter of keeping me connected to all the things I do each day.

This week I want to wrap up my initial geek gadget sharing extravaganza by letting you know of all the peripheral items I use and interact with that support me being connected in other ways.

So in no particular order here are those other devices and a little background on them:

I used to be a big PC gamer and my preference are sports and racing games. However, my PC gaming world came to a screeching halt in 2008 when Electronic Arts decided they would no longer produce Madden NFL and Tiger Woods for the PC. These were two games that I always picked up when they were released. So in the fall of 2008 I joined the world of console gaming with the Xbox 360 and later added the Kinect to it.  Last year for my birthday my wife got me the Xbox One and I have now integrated that with my cable TV and I really like the experience of interacting with the Xbox One through voice commands. I have also added Microsoft’s latest Multimedia Keyboard to it so I do not have to message by typing with the controller.

I have owned a TiVo for over 10 years. Watching television on your own schedule is the best way to watch TV. The first TiVo I had was the standard definition unit which was used for 5 years and the great thing about that device was how easy it was to upgrade/replace the hard drive which I did two times during its life-time. Five years ago I decided I wanted to make the move to an HD signal so I got the cable companies HD DVR. I think I lasted with that horrible interface for less than a week and then I got the TiVo HD which continues to serve us well.

This is my second DSLR – my first was a Nikon D3000. It is somewhatof a funny story on how I made the move to using a DSLR instead of a small digital camera although when it happened I was certianly not laughing. My wife and I were visiting out west in Arizona and on one of the days we went to see the Grand Canyon.  During those days I was using a great little camera from Olympus called the SP565UZ (Ultra Zoom). It was called an Ultra Zoom because it had a 20 time optical zoom on it instead of the typical digital zoom.  The clarity of the images this camera produced were awesome and it was compact for carrying around as well. So anyway, we were driving along the South Rim of the Grand Canyon and on our second overlook stop I set the camera up on a tripod to take a picture of my wife and I standing with the canyon in the background. As we stood waiting for the 10 second timer to elapse a gust of wind blew the tripod and camera over – lens first – into the ground. It left a massive gouge and scratch on the left side of the lens which I somewhat successfully hid in all of the subsequent pictures of the Grand Canyon I took for the rest of the day. As you might imagine I was very disappointed. All was not lost because we went back to Sedona where we were staying and I managed to get into the electronics store before they closed and get the Nikon D3000 on a great deal with an additional managers discount. That allowed me to spend the rest of our Arizona trip learning how to use the camera but also means we need to visit the Grand Canyon so we can get a full collection of scratch free images. Win-Win I would say.

Ever since the days of Windows Home Sever V1 and then Windows Home Server 2011 I have had an older machine running with this OS in the corner of my home office.  It was used to back up all of our computers each night and to also store and serve up data and media files throughout our home network. Unfortunately, Microsoft decided to stop producing this OS after WHS 2011 and so it was just living on in its post release support time frame.  WHS has allowed me to recover from some testing mistakes and hardware failures so it has always had a special place in my tech world.  Believe me when I say you do not want to discover that you need a back up when you actually need a back up – just ask my wife about this!  However, over the last few years as the cloud has become more integrated into our daily tech lives for synching our document data to the cloud and other devices with services like OneDrive plus the Reset and Refresh options for system repairs/restoral introduced with Windows 8/8.1 the need for bare metal restoration of a system is very low. With all of that in mind and a very nice discount when I was an employee at Best Buy I decided to try the Western Digital MyCloud as a home storage/sharing option and it works great. You can read more about my transition from WHS to the MyCloud over at WindowsObserver - Retiring Windows Home Server 2011.

I have used fitness trackers for a couple of years now beginning with the FitBit Zip and then the FitBit Flex.  Both of these are very good at their jobs of tracking steps and for the Flex my sleep however, when Microsoft made the unexpected announcement back in November for the Band I knew I wanted to use that device.  I received the Band for Christmas thanks to a timely restocking of our Jacksonville, Florida Microsoft Store and have enjoyed using it ever since.  It is a version one device so there are opportunities to improve the experience from a firmware, software and hardware perspective and I am looking forward to seeing where they take this.  I have written several blog posts about my experience using the band over at WindowsObserver if you want to dive into those details.

I use several apps and services on a daily basis as many of you do. Some of these are for communicating and others are directly related to curating content which I share on my @WinObs Twitter account.  Here is a quick run-down of those apps and services:

- Feedly to aggregate the over 100 RSS feeds I keep an eye on each day.

- Hosted Exchange email accounts with 25GB of storage. No more synching PST files between computers and devices with everything synched from the mail servers.

- Tweetium for Windows (desktop and Windows Phone) is the best Twitter app out there and the developer Brandon Paddock is very active and responsive to his users.

- Reading List. With the ability to share items on both my desktop and Windows Phone this is where I stick everything I want to read later.

- Nextgen Reader (desktop and Windows Phone) is the tool I read all of my Feedly RSS feeds with and it allows me to share items to Buffer so that it can subsequently share out a new link once every 15 minutes over my @WinObs Twitter account. I can also easily share items I want to talk about on my next Observed Tech PODCAST as well to OneNote.

- OneNote. After an introductory session on OneNote in February 2013 at a Microsoft event I was sold. The best example I can give is that OneNote allowed me to move away from printing out 20-30 sheets of paper each week to record my podcast to a completely paper free process. This program deserved to be a key element of the Surface Pro 3 and its scope and capabilities grow daily.

I have the Comcast 50Mbps service for my Internet connectivity. While I know many have experienced very poor service with them the service I have received over the past 11 years has been spectacular. Knock on wood I guess – just in case!

As I mentioned earlier, I am a podcaster so in a future post I will share with you my gear and process for producing a weekly show.  Both consumers and business are always looking for ways to connect with their communities and prospective customers. Podcasts are a great avenue for doing that.

So hopefully this has helped you understand more of my tech background and usage habits.  I look forward to the continued discussion about your tech as well so please be sure to comment and ask any questions you might have.