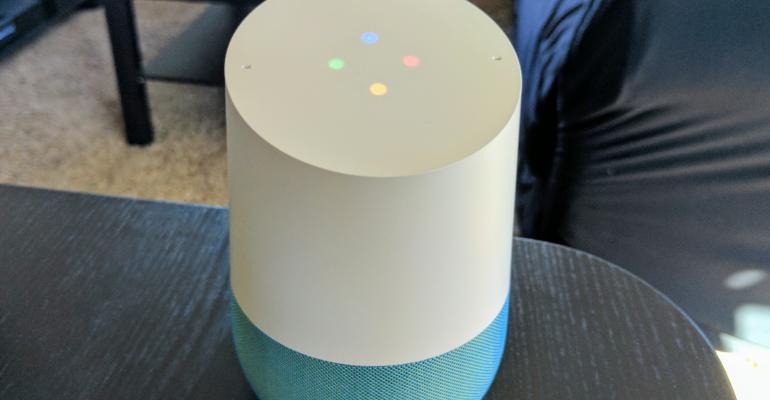 There’s a new digital assistant in town that wants to kick Alexa off your end table. Google Home is the Internet giant’s competitor to the Amazon Echo, a device that clearly caught the company off guard how quick it was to turn around and build a competitor.

We’re in the very beginning stages of this burgeoning rivalry, but Google is banking on the years it’s spent building a knowledge graph that can now come to life and offer an answer for most of your burning questions. And there’s the vision of a “personal Google” that is always there with the right answer, relevant information, or even the ability to turn on the lights

After living with Google Home for a couple of weeks (I received a review unit from Google just before launch), I’m pretty happy with the experience. It hasn’t been transformative in the way that a first smartphone was, but it’s formed a few core habits that would now be hard to give up. More importantly, Google Home points to the future of search and how an omnipresent digital helper will soon be the new normal.

THE BASICS: HOW IT WORKS

Setting up Google Home is pretty straightforward. You grab the Google Home app, connect it to your account, and then can start asking for answers right away. Google publishes a list of commands that range from interrogative questions to practical requests, like setting a timer for 10 minutes or even telling you a joke. My favorite is the ability to get a news forecast from a variety of sources. I can just shout out, “OK Google play the latest NPR news” and I’m all up to date. Same goes for sports updates, tech news, and other topics.

Google Home has become my radio news companion thanks to the various customization options.

Google did a good job at creating a home device that doesn’t look too strangely futuristic, so it should fit in fine with your home decor (comparisons to a Glade air freshener aside). You can even swap out the mesh speaker covers. The $20 add-on comes in six different colors - a neutral gray ships with the unit and should blend in with most situations.

I suggest you put it wherever you’re likely to need voice assistance the most. That could be the living room, particularly if you connect it to smart lights and want that instant fix of getting a random question answered whenever you want. Or if you want to use Home as your daily alarm and get the day’s news report and a readout of your calendar, then perhaps the bedroom is best.

Not surprisingly, Google Home has a major advantage when it comes to the type of knowledge it offers. Your toddler may even enjoy the vast array of animal sounds that’ll be broadcast once you ask for them. Also, I suggest connecting your Spotify, Google Play Music, or other supported service so you can start up a playlist right away.

You can choose which music service to use as your default when asking Home to start up a new playlist.

Home also responds to more than your voice. The top of Home is actually responds to a few gestures. Tap to pause something that’s playing or to restart it. A long press will also work just the same as saying, “OK Google.” Swipe in a circular motion to change the volume.

The device has also become a great set of desktop speakers. Since it has Chromecast functionality built in, I can easily cast a tab with a YouTube video or music and get a much better sound than what comes on my laptop. It won’t replace a sophisticated system but it’s a worthwhile combination of a digital assistant and great-sounding speaker all in one package.

WHERE HOME NEEDS TO GET BETTER

Given that Home is a newborn, it certainly has some room to grow. The third-party integration is pretty minimal right now, especially when compared to the extensive number of Alexa skills. You can hail an Uber and find out when your flight leaves, but by and large right now everything needs to connect through Google’s services. Third-party services are there, but there aren’t a ton.

There are hints of how the capabilities will branch out, however. The best integration is through If This Then That, which lets you automate some tasks with the Google Assistant. You can add a task to Todoist, turn on your smart lights, and add a contact via voice. Many of these are currently more useful with the Google Assistant on a Pixel, but they point to a more interactive future.

Finally, the better that Google Home gets it’ll create another dilemma - having access to it at all times. I see why Amazon built smaller Echo devices that can be placed strategically throughout the house, as right now you need to invest in multiple Homes or be strategic about placement if you always want it within earshot.

I’m sure that Google has created some sort of mini me version of Home in its labs, and would love to bring it to market if enough people buy into its smart home system.

MY LIFE WITH GOOGLE HOME

After using Google Home for  while, it’s become a core part of my daily technology use. I keep the Google Home in my office, instead of the living room or kitchen, because that’s where I tend to want the capability to shout out voice commands. This could change, especially if I decide to get with the program and install some smart lights or step up my video streaming game. Until then it’s a useful, all-knowing orb that adds some omnipresent brains to my office life.