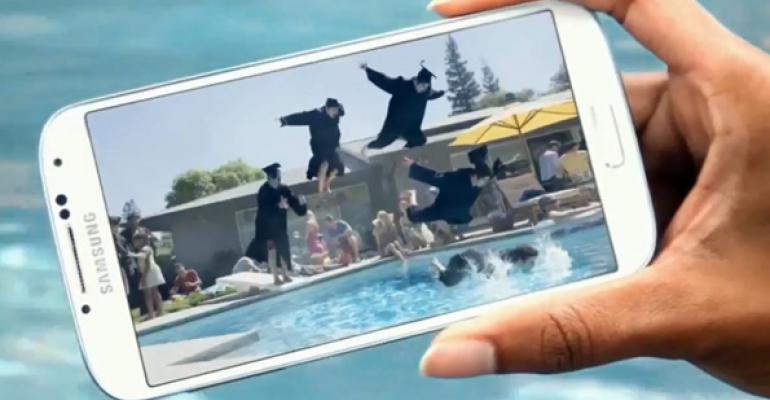 iPhone users who were upset that previous Samsung ads mocked them while promoting unique features in Samsung’s smart phones will love the firm’s new ad for the Galaxy S4. This ad does document many Galaxy S4 features that the iPhone lacks, but it does so without any mocking at all.

Called Graduation Pool Party, the new ad fits in stylistically with previous ads for the Galaxy S3, which mocked iSheep standing in line waiting for the next iProduct. This time around, it’s all about unique Galaxy S4 features. And while there’s certainly an iPhone moment—these people are incessantly told they have the most sophisticated phone there is, after all—there’s no actual mocking at all.

“So some smart phones are smarter than other smart phones?” an iPhone user asks a Galaxy user after discovering his phone doesn’t support Tap to Share.

“What are we doing with these phones?” he then asks his wife.

Some key Galaxy S4 features shown in this ad include

Air Gesture. You can swipe your hands in front of the phone’s screen to answer calls and texts and perform other actions.

Tap to Share. Like its predecessor (and Windows Phone handsets), the Galaxy S4 supports an NFC tap to share feature that lets users transfer photos and other information between devices.

Drama Shot. This feature combines several photos taken in sequence to show an action scene similar in one shot.

Smart TV integration. Not surprisingly, the Galaxy S4 integrates with Samsung’s new Smart TVs and can be used as a smart remote control (somewhat similar to Xbox SmartGlass).

This is a great ad, and it proves that a more subtle approach can work too. I'm sure Apple fans will respect this approach ... he says mockingly.