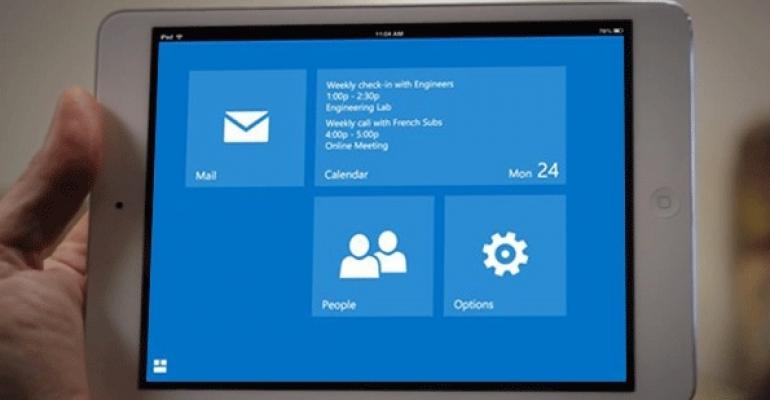 Details Emerge About Office for iPad

It's coming sooner, not later

With Microsoft Executive Vice President Tami Reller seeming to tiptoe around a discussion about Microsoft's plans for delivering a full-featured Office version for iPad this year, we don't need to parse her comments to learn more. A related and reliable report suggests that Microsoft is in fact speeding up the delivery of Office for iPad. And it will probably arrive ahead of the version for Windows 8.

To be clear, Microsoft currently offers versions of its Office suite on a number of platforms. This includes the full-featured Office products on Windows and Mac, the web-based Office application in Office Web Apps, and a version for Android, iPhone, and Windows Phone handsets called Office Mobile. But it is also prepping what I call Touch Office for both Windows 8/Windows RT and the iPad (and presumably Android-based tablets, though I've not heard anything concrete about that version). Functionally, Touch Office—code-named Gemini—should sit somewhere between "full" Office and the Office Web Apps, and offer a much more complete experience than Office Mobile.

Last year, Microsoft's then-CEO Steve Ballmer admitted that the firm was working on these products and that the Windows 8/Windows RT version would ship ahead of the iPad version. This seems to make competitive sense, although some might argue that every day that goes by without an Office for iPad is a missed opportunity.

During an appearance last week at a Goldman Sachs conference, Tami Reller was asked about Office.

"You'll see us be thoughtful about how and when we bring what applications to what platforms," she said in a widely quoted but misunderstood comment. "You'll see us continue to articulate where our cross-platform strategies are and how customers can come to expect what from us. Clearly we think about the future of Office as we contemplate that for sure."

Some took this to mean that Microsoft was reconsidering delivering Office for iPad at all. That's not happening, but then Reller never even hinted at such a thing. Before making the comment quoted above, she said something quite platform-agnostic.

"These core applications, these core brands ... are so important to enterprise customers and consumers," she said. "How do we make sure that we're thoughtful about what we're doing on the Windows platform, as well as cognizant of the fact that there are other devices in their lives?"

By releasing Office on other popular devices, of course. And according to a reliable report from Mary Jo Foley, Office on iPad is now on track to happen sooner than was the case previously.

Like Office Mobile, Office for iPad will almost certainly require an Office 365 subscription (consumer or business).

Oddly, Foley's report has triggered another round of misunderstanding, with one blog suggesting that such a release could force Microsoft to cancel its Surface lineup of tablets. After all, if customers can get Office for iPad, why should they bother getting a Surface?

Simple: Surface and other PCs can run the more functional, "full" version of Office. This version of Office ships only on Windows, and Windows RT devices like Surface 2 include a free copy of the software that doesn't require an Office 365 subscription.

Ultimately, Microsoft's strategy shift to devices and services must include getting the firm's software and services on popular but competing devices, like the iPad. Getting Office on iPad sooner rather than later makes sense.

Related: "The Microsoft Surface or the Apple iPad at Work?"