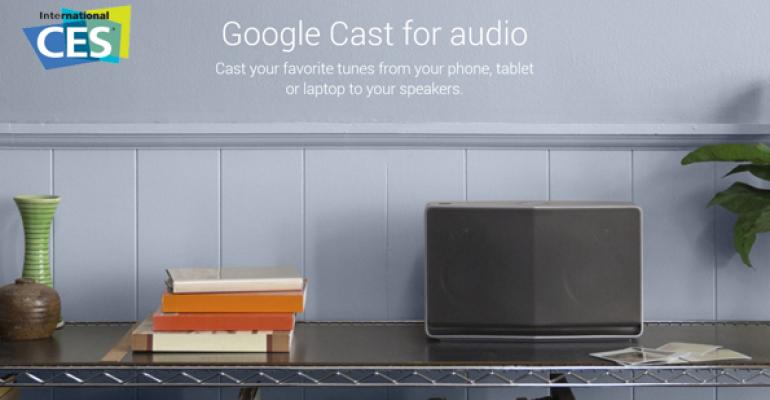 Can you hear me now?

Google today announced that it is taking the media casting capabilities from its popular Chromecast device and making it available as a standard of sorts for audio casting. Called Google Cast for Audio, this technology already works with a number of Android audio apps and will ship as part of new speakers, sound bars, and A/V receivers later in 2015.

"Our objective has always been to be much more ambitious than just the Chromecast," Google Cast director of product management Rishi Chandra says. "We want to define a mobile first experience for how you drive your entertainment devices. We want more and more devices out there. This is going to be a big year for Google Cast."

I guess you could consider Google Cast for Audio a lower-cost answer to the Sonos media streaming equipment, or at least a more open version of Apple's AirPlay technology. But there is a key difference between Google Cast for Audio and those existing solutions: Google's technology actually pulls the audio from the Internet cloud and not from the smart phone, tablet or PC you use to control playback. As with Chromecast, the originating device "hands off" playback to the casting device and is then no longer needed.

This has a few ramifications, mostly positive. For one, you could conceivably have a number of different devices controlling playback, which could be interesting for a party. And it's likely that the audio devices that use Google Cast for Audio will come with their own dedicated remote control, which should obviate one of the key issues with Chromecast.

Google says it is partnering with companies like Denon, LG and Sony to make Google Cast for Audio happen this year, and with chip makers Broadcom, Marvell, MediaTek and system integrator Libre Wireless. I suspect this initiative will be a lot more successful than, say, Google TV or Nexus Player.

From an app perspective, Google Cast for Audio obviously works with Google Play Music, but also a number of popular Android audio apps like iHeartRadio and Pandora. But it doesn't work with Spotify, which is arguably the most popular music app, or with Xbox Music. Hopefully that will change.