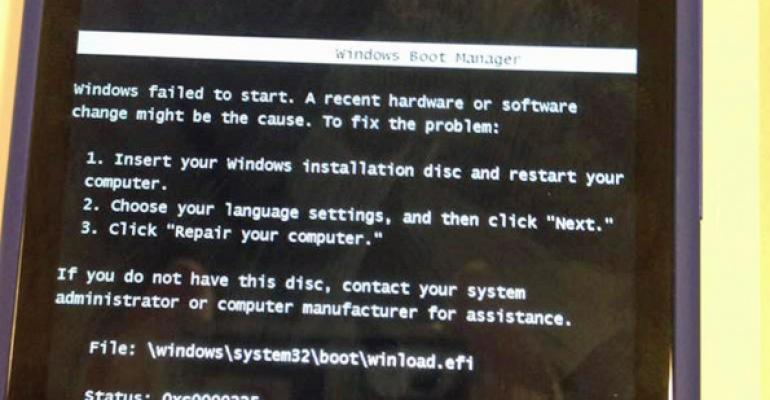 Does Windows Phone have problems? Sure. This isn't one of them

I should have written this up sooner. Widespread reports, especially on hyper-partisan Apple blogs, delighted in a supposed Windows Phone 8 error message that prompted the user to insert an installation disc, as would be required on desktop versions of Windows. How ridiculous, they chortled. And they’re right. Because that's not the whole story.

You’ve perhaps seen the photo, which was tweeted by Mikko Hypponen. And no, I’m not linking to this guy, who has behaved dishonestly and has received more attention than he deserves.

If you’ve been using Windows for any amount of time, you recognize this as something that happens on desktop versions of Windows when something goes seriously wrong. Alas, despite being based on the same codebase as Windows 8, Windows Phone 8 doesn’t provide a way to insert an installation disc. Cue the hilarity.

Except that it’s complete and utter bulls!#$.

What Mikko didn’t mention at all in his oft-republished tweet was that he had actually “reflashed” the phone and failed. And while he finally admitted it was “not a normal failure,” what he didn’t mention was that what he was really doing was trying to hack the phone by loading a modified boot loader. And this is exactly the type of situation in which this screen would appear on Windows: It’s trying to protect the system from an attack. The installation disc of course includes the known-safe bootloader code.

So all this seemingly hilarious photo “proves” is what Microsoft has said all along: That Windows Phone 8 is basically just a version of Windows 8. Which, by the way, is a good thing.

Look, it’s possible that someone, someday, will run into this screen innocuously. Software isn’t perfect. But this isn’t a case of innocence, it’s someone purposefully not explaining what they did and then making Windows Phone look bad as a result. Hilarious!

Shame on you, Mikko. And shame on all the chuckle-headed blogs that posted about this without even attempting to understand what really happened.