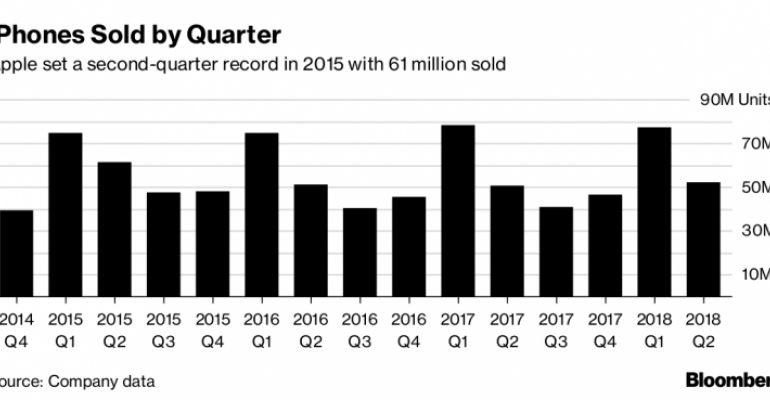 Apple shares rose more than 4 percent in extended trading, after closing at $169.10 in New York on Thursday.

Apple revenue rose 16 percent to $61.1 billion in the fiscal second quarter. That was the fastest growth in more than two years. Profit came in at $2.73 a share, the company said Tuesday in a statement. Analysts expected sales of $60.9 billion and earnings per share of $2.64, according to data compiled by Bloomberg.

Fiscal third-quarter revenue will be $51.5 billion to $53.5 billion, also ahead of Wall Street forecasts.

Apple sold 52.2 million iPhones in the fiscal second quarter, up 2.9 percent from a year earlier. Analysts had projected of 52.3 million, on average, although some investors expected fewer units. The average selling price was $728, versus analysts’ expectations of $740. That suggested the flagship iPhone X didn’t perform as well as some anticipated when it launched last year.

Concern about the iPhone business was fanned by suppliers that recently reported weak demand for high-end handsets, another sign the smartphone boom that made Apple the most-valuable company is ebbing. It has also been under pressure in China, where some consumers are shunning pricey iPhones and local rivals like Oppo and Vivo are grabbing market share. Tuesday’s report eased these fears, with China revenue rising 21 percent year-over-year.

While the iPhone X is one of the top smartphones on the market, the device’s $999 starting price was too much for some consumers. However, Apple offers an increasingly broad array of other iPhones to suit different budgets. And it’s working on a new lower-cost model that has iPhone X features like 3-D facial recognition and an edge-to-edge screen.

Apple Chief Executive Officer Tim Cook highlighted strong revenue growth from iPhones, services and wearable devices like the Apple Watch. He was unconcerned about the high price of the iPhone X. "It’s priced for the value that it is, an incredible product with lots of leading edge innovations that sets us up for the next decade," Cook said in an interview.

Even as questions have swirled about iPhone demand, Apple continues to generate mountains of cash, and other businesses, such as services and wearable devices, are growing strongly.

On Tuesday, the company committed to spend an additional $100 billion on share repurchases. That comes on top of an existing $210 billion buyback program to be completed during the fiscal third quarter. Apple also increased its quarterly dividend to 73 cents a share from 63 cents.

The company’s Other Products segment continued to see strong growth with revenue up 38 percent to $3.95 billion. The category includes AirPods headphones, the Apple Watch, Apple TV, and the HomePod. Cook noted that sales of wearable devices jumped almost 50 percent, year-over-year.