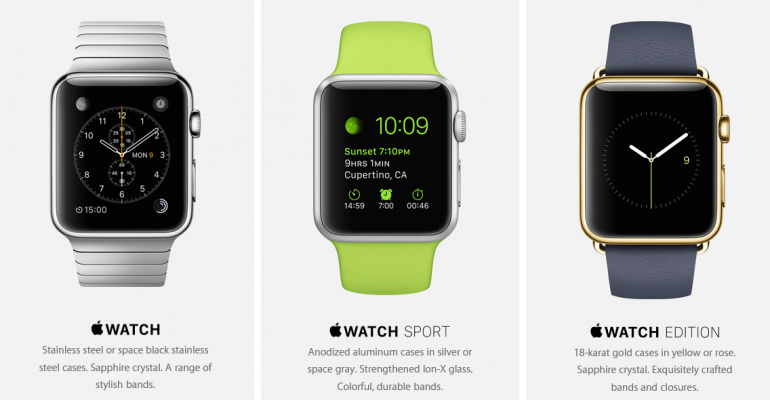 The rumor mills will now go silent but the build-up will continue for the next month as the pre-order date of 10 April approaches and ultimately the availability date for Apple Watch on 24 April 2015.

I just finished watching the Apple keynote for their Spring Forward event, on my Windows desktop by the way, and my head is still scrambled trying to put those Apple Watch prices into perspective.

However, before I get into that, let’s do a quick rundown of the info shared during the keynote.

- Showed a video of a new flagship Apple Store in West Lake, China which brings the total of retail stores in China to 21. Apple also confirmed there are now 453 retail stores in 16 countries and last quarter they had 120 million visitors.
- Apple TV price drop from $99 to $69 and will have HBO NOW on it even if you do not have a cable or satellite subscription. Will cost $15 per month.
- iPhone has grown 49% year of year compared to just 26% for the rest of the smartphone market
- Apple confirmed that they sold their 700 millionth iPhone since its launch in June 2007.
- Apple Pay is now accepted at almost 700,000 retail locations and works with over 2500 banks.
- Apple Pay will now work with Coca-Cola’s newest vending machines.
- Apple’s CarPlay has the commitment from all major car brands to have that service in their cars.
- HealthKit has over 900 apps to assist people in keeping an eye on their health.
- ResearchKit will turn your iPhones into tools for medical research. They have teamed up with a very impressive list of schools and research groups. I really like seeing technology used in such positive ways.
- The first five apps made with ResearchKit are available today and the ResearchKit framework itself will be available next month. It will be an open source kit so everyone can contribute.
- Introduced a new fanless MacBook which has been completely re-engineered. Weighs in at 2 pounds, 13.1mm thick, full size LED backlit keyboard using a new butterfly mechanism to make the keys more stable as you type, 12 inch Retina display which uses 30% less energy for same brightness levels, a new Force Touch trackpad with a capacitive glass surface. Re-work of the MacBook carries on to the logic board and internal batteries and promises an all-day battery (9-10 hours depending on usage). It has 8GB of RAM and an Intel Core M processor available in different speeds.
- New MacBook also has wireless AC and Bluetooth but also a single connector, USB-C, that provides USB, DisplayPort, HDMI and VGA abilities to the device. It will be shipping on April 10th.
- MacBook Air received an update to the fifth generation Intel Core CPU’s and Thunderbolt 2. The 13 inch MacBook Pro with Retina Display has been updated with the Touch Force trackpad. Both are available immediately.

Next up was the item everyone was waiting for and that was the new Apple Watch.

- Most personal Apple device ever made according to Tim Cook.
- Available in three tiers: WATCH, WATCH SPORT and WATCH EDITION
- All are available with a variety of watch bands and sizes (38mm and 42mm)
- All-day battery life (18 hours)
- Comes with Wi-Fi, Bluetooth, water-resistant, heart rate sensor, accelerometer, gyroscope, Retina display, Force Touch and a speaker and microphone so you can take calls and interact with Siri.
- The Watch relays notifications from your phone and allows you to reply by multiple methods, has a growing app library and some very unique features like contacting other friends who are Watch users directly through the Watch to share drawings and your actual heart rate.
- Fitness wise there is no GPS built in so it uses the accelerometer to track steps, distance, etc.

Pricing is based on the tier of Apple Watch you want to purchase:

The price range varies dependent on the phone size (38mm/42mm) and type of band you select with your device.

As I mentioned at the top of this post the prices are what caught me off guard the most.  I have no doubt in my mind that people are going to buy these watches – even the most expensive one that is $17,000 – but they are not going to sell like iPhones in my opinion.

iPhones are highly subsidized devices by the cellular carriers and that contributes to the brisk sales of those phones however, without the prices of these Watches being supported through subsidies then the market is just not going to take off in the same manner.

This morning we asked in a poll how you would approach the Apple Watch once it was released. So far  46% of you said you are not interested in any style of a smartwatch and 27% of you indicated you would choose another option for your smartwatch instead of Apple’s. Please be sure to vote and let us know your view on smartwatches and the Apple Watch specifically.

So overall - what do you think of today’s announcements from Apple?

But, wait...there's probably more so be sure to follow me on Twitter and Google+.
4 comments
Hide comments
Related