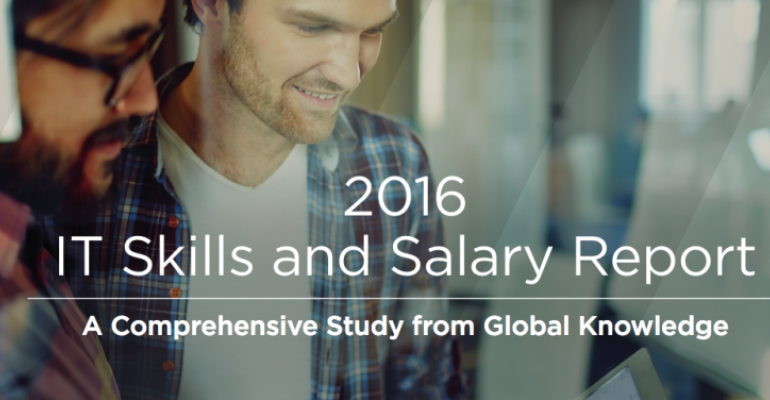 4 Biggest Takeaways from 2016 IT Skills and Salary Survey

Among the wealth of data that Global Knowledge collected and analyzed, four big trends emerged.

Is it over? Can we finally breathe a sigh of relief? The recession that began in 2008 has been reverberating throughout the economy ever since (albeit to a lessening degree over time), affecting salaries, hiring and professional development, among many other things. At the same time, the demand for cloud-based services, the constant threats to security, and the need for fast, always-available access are big drivers of companies’ human capital strategy. These are some of the most important influences on IT salaries and skills—which are, respectively, generally improving and showing some gaps, according to the 2016 IT Skills and Salary Survey conducted by Global Knowledge.

The 2016 IT Skills and Salary Survey was conducted online from Sept. 21 to Oct. 23, 2015. Global Knowledge, a learning services and professional development solutions provider, and its partners sent out survey invitations to more than half a million IT and business professionals. The survey yielded more than 14,000 completed responses from around the globe, with the majority coming from the United States and Canada. The 2016 IT Skills and Salary Report focuses on North America, where 8,923 IT professionals and 1,263 business professionals shared their input.

This is the ninth year that Global Knowledge has conducted the IT Skills and Salary Survey. New this year is insight directly from application developers, including the tools and languages they use most. For the second year, Global Knowledge asked IT decision-makers to share their opinions, calling on them to elaborate on:

• Where and why skills gaps exist

• The value of certification to their team members

Global Knowledge once again pulled in non-IT professionals to get their take on training, certification and workplace challenges.

Among the wealth of data that Global Knowledge collected and analyzed, four big trends emerged:

Meanwhile, a 9 percent increase in the number of entry-level—and therefore lower-paid—respondents is at least partly to blame for the decline seen among non-IT salaries.

For the second year in a row, 75 percent of IT personnel reported receiving a

raise, while 66 percent reported receiving a bonus—the highest percentage Global Knowledge has ever reported. Seventy percent of IT decision-makers received a bonus last year, up from last year’s 64 percent, while only 59 percent of non-IT professionals reported a bonus—down from 74 percent in the previous year.

2. There is a skills gap, and it is stressing out employees.

About a third of IT decision makers who responded to the Global Knowledge survey said there are measureable gaps in their group’s technical skill sets. About the same percentage noted that they might be OK skills-wise right now, but they are concerned about whether their employees’ technical skills will hold up in the next two years. Futher, the survey found, these current and future gaps are causing increased stress on existing employees.

3. Want job security and a higher salary? Brush up on your cybersecurity, cloud computing and networking skills.

Given the major security breaches that seem to headline the news on a daily basis, it’s little wonder that IT security tops the list of skills that IT decision makers want their team members to have. IT decision makers also identified skills in cloud computing, IT architecture, and network and systems engineering and operations as high-priority needs. But, you can’t always get what you want: One of three

ITDMs reported having difficulty finding skilled talent to fill cybersecurity positions, while one of five reported difficulty filling cloud-related ones. Of course, this is good news for the IT pros who can list these skills on their resume: Respondents with job roles in cloud computing, IT architecture and security reported higher average salaries than those with job roles in other areas.

4. The need to build new skills is the top driver for professional development, but budget (or lack thereof) sometimes gets in the way.

Technology is at the heart of business development today, and technology is changing faster than ever before. To be competitive, companies must be agile. To be agile, companies must have IT employees who can implement the latest and greatest in tech. All of this requires training, and about three-fourths of this year’s IT respondents said they participate in some form of professional development to build new skills. Of those who did not train in the previous year, more than 45 percent said their organizations did not allocate funds for professional development. According to IT decision maker respondents, lack of training funds is also one of the driving reasons behind skills gaps in IT departments.