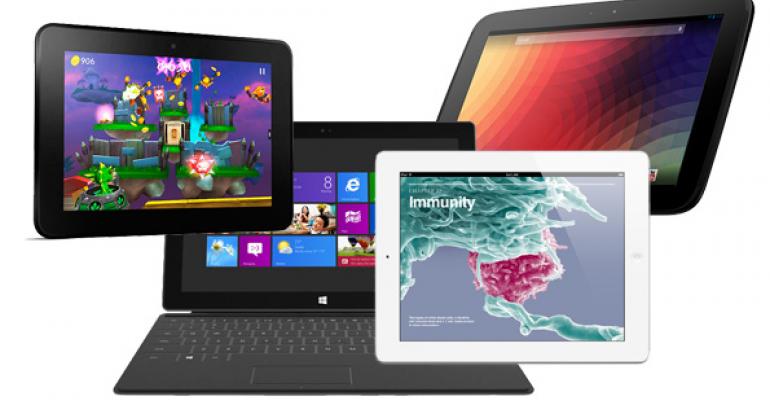 When Shopping Tablets, Buy Into Ecosystems, Not Into Devices

Devices are temporary, but ecosystems are forever

As we barrel through the holiday selling season and swimming in an ever-rising sea of new devices, I’m reminded that the decisions one makes should be about the ecosystems first and the actual devices second. That is, your choice of an iPad, Nexus, Kindle, or Windows tablet should be preceded by a thorough understanding of what’s available on each device first.

So, stop thinking about tablets for a moment. And consider what’s out there from an ecosystem perspective. There are four major choices there—Amazon/Kindle, Apple iTunes, Google Play, and Microsoft—and they’re not necessarily mutually exclusive. On some devices, you can mix and match between two or more of these ecosystems, and on a real PC, you can (almost) have it all.

We’ll get to that. First, the ecosystems.

Amazon offers the best e-book platform, the Kindle, which is also available in somewhat limited form (with regards to periodicals especially) on Apple iOS devices, Nexus and other Android devices, and Windows. That said, the most complete Kindle experience occurs only on Amazon devices.

Amazon has an excellent MP3 store and offers a cloud storage and cloud jukebox player called Cloud Player. The firm’s AppStore for Android is only a fraction of the size of Google Play but is more curated, safer, and generally offers higher-quality apps.

Many but not all Amazon services are available to non-Kindle Android devices.

Overall, the Amazon ecosystem is very well rounded and full-featured.

Apple offers the biggest and most full-featured ecosystem of them all, but to take full advantage of it, you must be locked in to Apple’s devices: iPad for tablets and iPhone and iPod touch. The highlights here are the sheer breadth of the offering, and the iTunes U material, which is top notch.

Note that iTunes media content (music, TV shows, movies, podcasts, and iTunes U) is available on Windows 8 as well, but not on Windows RT.

Google Play has come from behind but now offers a compelling alternative to iTunes. It will soon offer the largest app store selection, though complaints about app quality are fair.

Google Play TV shows and movies can be played through a web browser on PCs, but only in SD format. To access this content in HD, you must have an Android device.

Google’s collection of cloud services is vast and much of it is useful. That said, much of it is available on iOS, PC, and Amazon/Kindle devices too.

Microsoft’s entertainment services are now consolidated under the Xbox brand. Xbox Music and Video require Windows 8 or RT PCs, Windows Phone 8 devices, or the Xbox 360. Some HD movies purchased on Xbox 360 are not available on PCs, so users must be careful about what they purchase and where.

Windows PCs offer the best application selection on earth, but few of these applications are mobile apps and none work with Windows RT. The new Metro app platform is off to a good start, but is still small.

The extras on the Microsoft side are considerable, and it’s worth pointing out that much of the content in the other ecosystems work with Microsoft (i.e. Windows) devices.

While many people will simply buy into a single ecosystem, it’s possible in many cases to spend the majority of your time and money in that one ecosystem but still have the option of using one or more other ecosystems as well. Some of the combinations may surprise you.

Windows RT remains limited. Until and unless Amazon, Google, and Apple step it up with Metro app development, the choices there will be few. Windows RT does have an Amazon Kindle app.

If you purchase a Nexus or other Android device, you can load Amazon’s AppStore and benefit from two high-quality stores and app collections, plus use Amazon MP3 and other Amazon apps and services. Microsoft is starting to make a growing collection of apps, too, and will be porting Xbox Music to Android.

Those with iPads will find some high-quality Amazon apps too, though Amazon MP3 is an iPhone-only app at the moment. (It does work.) Microsoft is starting to make a growing collection of apps, too, and will be porting Xbox Music to iOS.

Personally, I like the mix and match approach. And of course those who can afford it can use multiple devices. I prefer to keep my PCs clear of entertainment content and use them for work, while I will bring a small Android (Amazon Kindle Fire HD or Nexus 7) tablet or iPad mini with me when traveling for entertainment. I keep both AppStore and Google Play stores on my Android devices, and use Amazon MP3 on the iPad, for example. And all or most of these devices support external media apps and services like Netflix, HBO GO, Hulu Plus and others that many will find useful, another consideration.

Confused yet? Welcome to the party.