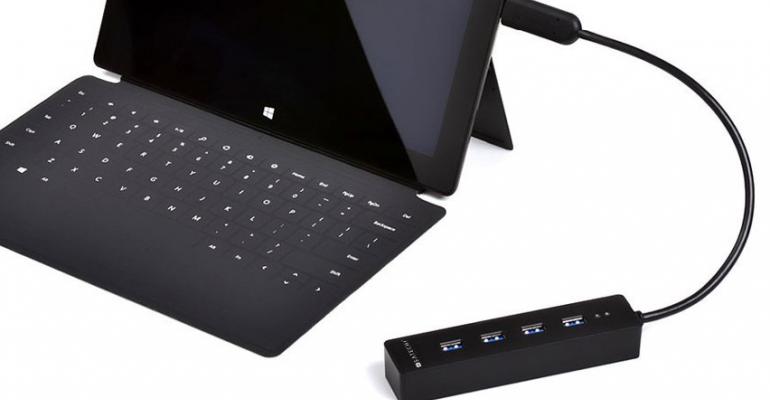 Surface Tip: Get a USB Hub

With the recent release of the Windows 8.1 Preview, I’ve been using Surface Pro and Surface RT more regularly again, but I keep bumping into a side-effect of the devices’ most curious design choice: With only one USB port on each, I keep having to unplug and re-plug USB devices. Fortunately, a USB hub is a simple enough solution.

If you search for Surface USB 3.0 hub on Amazon.com, you’ll see where this is headed. But what I really wanted, I thought, was a device that could be used semi-permanently with the Surface, one that would impact its mobility as little as possible. I wanted something I could use at home, and on the go.

The Juiced Systems Microsoft Surface 5 in 1 Adapter seems to fit the bill. In photos, it looks fantastic and seems to match both the contours of the Surface and its look and feel.

The Juiced Systems adapter also has the added benefit of providing SD and micro-SD cards, and micro-USB, in addition to two USB 2.0 ports. But there are problems. First, the adapter is cheaply made, and offers nothing close to the quality of the device to which it connects. Second, it doesn’t stay connected very well because all it connects with is that USB port. There’s nothing else for it to latch onto.

As problematic, the adapter is also only truly viable on Surface RT (for which it was admittedly designed). You can connect it to Surface Pro, but it covers up the volume down button. (Why Microsoft put the USB ports on these devices is unclear, but unfortunate.)

So that one is kind of a non-starter, for me at least: I want something that works well on both.

I also grabbed a Satechi 4 port portable USB 3.0 hub. It’s only $20 and provides four USB 3.0 ports (but no micro-SD/SD, which would admittedly be nice; both Surface tablets of course include micro-SD).

This one works well with both Surface Pro and Surface RT, and I’ll be traveling with this going forward. It’s not something I’d leave attached to the device in transit, but it does the job in a truly workmanlike fashion. A reasonable compromise.

(If you’re a Surface RT user, get a USB 3.0 hub or adapter even though that device supports only USB 2.0. That way you can use it with other PCs and devices as well.)

At home, of course, I’m using the Plugable UD-3000 USB 3.0 Universal Docking Station that I had originally purchased for Surface Pro back in January. Since my desktop computer recently died, this has been resuscitated for its original use, and I’m actually back to use Surface Pro as my day-to-day PC, tethered through this device to my large display, keyboard and mouse, and other peripherals. It’s always worked great in this capacity, and with Windows 8.1, the desktop display issues I noted previously are getting better.

Of course, none of this would have been necessary if Microsoft had simply given Surface enough ports: The v2 versions of these devices should include at least 2 USB ports. And a full-sized SD port for camera users would be nice as well.