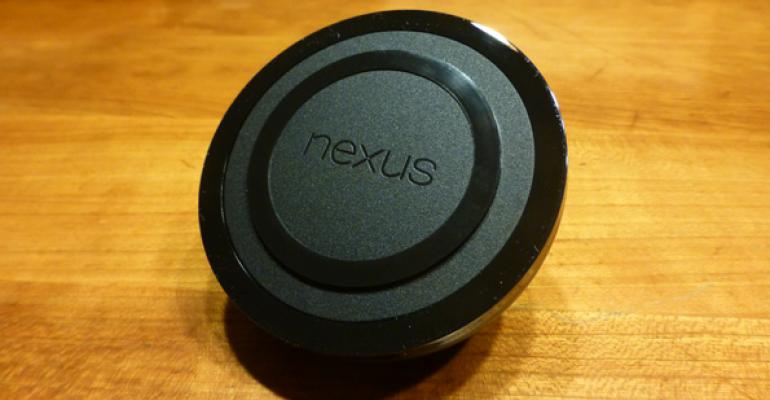 Wireless charging is the future for all mobile devices

When it comes time to evaluate and buy your next smart phone, you can add wireless charging to the list of “gotta-have-it” features. This is a real convenience, and one I expect to see become more and more common in all mobile devices.

The Nokia Wireless Charging Stand, in particular, appears to be much more sophisticated than the charger I got in that it offers additional features like the ability to enter a useful “desk” mode with a clock or whatever other app-based live information. This is a common feature with proprietary Android docks as well, but the Nexus 4 Wireless Charger just does one thing: Charge the device.

The Nexus 4 Wireless Charger also has one other downside: You have to position the device properly on the charger in order. If it’s too low on the angled charger, which is easy to do, the device won’t charge. I’m also surprised you don’t get a helpful “charging beep” more quickly; this lets you know the device is charging, of course, allowing you to safely walk away.

Still, this is the clearly the future. And while plugging in a mini-USB cable isn’t exactly difficult, placing a device on a charger surface is much easier. And it will get even easier as entire surfaces on desks and other areas of home and work being offering this capability in an integrated fashion. Imagine charging your smart phone (or other device) simply by setting it down on virtually any surface. That’s where this is heading.

Pedants will note that a wire is, of course, involved. You have to get electricity to the charger somehow. But the “wireless” bit here comes from the connection between the device and the charger. That is indeed wireless.

Here are a few shots of the Nexus 4 Wireless Charger. I’ve ordered a Wireless Charging Shell for my Nokia Lumia 820 so I can test that device with it as well.