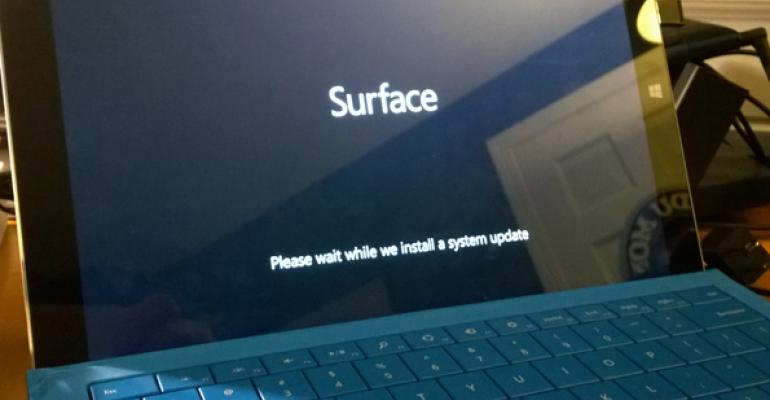 First of many, methinks

With just hours to spare—the firm had promised this in time for the device's public release on Friday—Microsoft delivered its first firmware update for Surface Pro 3. Here's what's new and how you can get it installed ASAP.

According to Microsoft, this firmware update includes a ton of stuff--and that explains the long install time. Among the fixes/updates are:

Microsoft does say, too, that it addresses the power management issues I documented in Surface Pro 3: When Bad Things Happen to a Good Tablet and also includes some performance improvements.

Here's how you get the update. (Yes, you will need to go through this if you get a new Surface Pro 3 tomorrow.)

If you have a Surface Pro 3, navigate to PC Settings, Update and Recovery and then Windows Update. Here, tap the Check Now button. When that's done, tap "View details."

In this screen, you'll see (among other things, perhaps) an entry, "System Firmware Update – 6/19/2014." That's the firmware update, of course. If you select "Details" next to that entry, and then "Support info," you'll be brought to a generic Microsoft Support page as the firm hasn't yet provided any information about the update. (It will.)

Tap Install. The updates will be at least partially installed and then Windows will prompt you to reboot. It's really serious about rebooting.

On reboot, the firmware update will install. This actually took a lot longer on my machine than I'd expected—several minutes at least—and the fan kicked in loudly and obviously by the time it was done.

More soon, when I find out what's in this thing.