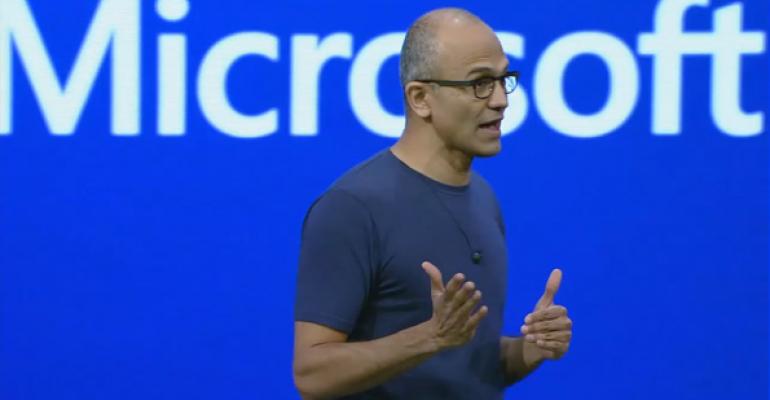 Will IT Ever Buy Into "Mobile First, Cloud First"?

Microsoft is moving to mobile devices and cloud services, with or without you

Since Satya Nadella took over as the new Microsoft CEO, we've seen major changes to the ways in which the firm does business. But for all the changes sweeping through Redmond these days, the most profound may be the firm's new "mobile first, cloud first" strategy, in which for the first time perhaps ever, Microsoft has encapsulated its intentions in a simple and easily understood statement. The only question is whether IT will ever buy into it.

Oddly enough, the quandary here is an age-old one. It's just been sped up, a lot.

Years ago—humorously, I think this was actually in the wake of Windows Vista—someone from the Windows team asked me what the company had to do to get its business customers to upgrade to new Windows versions immediately instead of waiting for the inevitable Service Pack 1 (SP1) release that would ostensibly fix all the big problems. I replied at the time that there was no quick fix, that that kind of trust required several years—perhaps several Windows releases—to be essentially problem free.

Looking back on this episode, it seems almost archaic compared to the way things are done today. But only from a timing standpoint.

That is, SP1 was always a lie. It was a convenient charade that companies could use to pretend that they really wanted to upgrade to the new Windows version but were just doing the pragmatic thing and waiting for all the bugs to be worked out. What they were really doing was not upgrading anything. And you can see the results of that most obviously in the Windows XP user base, which sits conservatively at somewhere north of 400 million users 12 and a half long years after its initial release and weeks after support for the system ended with a thud.

Microsoft's response to the SP1 phenomena still makes me laugh a bit: It just stopped making service packs. It's reneged on this somewhat, yes. But for the most part, service packs are a thing of the past. Windows 7 still has just the single service pack, released over three years ago. Windows 8 has had no service packs, though trying to parse through what exactly Windows 8.1 and the Windows 8.1 Update are is a discussion that would require many hours and much beer.

Of course, the world has changed a lot since Windows Vista. This change is exemplified pretty well by Microsoft's new corporate mantra, "mobile first, cloud first." Supposedly an invention of its new CEO Satya Nadella, this concise phrase basically means that Microsoft is following the biggest industry trends and focusing its business on targeting mobile devices with cloud services.

Mr. Nadella introduced the "mobile first, cloud first" saying in his opening email to Microsoft employees. And at the event at which the firm introduced Office for iPad in March, he relayed a funny story about some feedback he got about this saying from those employees.

"And like any place that's got predominantly computer scientists, I get back this mail saying, hey, look, how can two things be first? I mean, do you have a problem with ordinal numbers or something?" he said, to laughter.

It is funny, but he's right: Cloud and mobile are in fact one and the same. The mobile devices that users are flocking to are useless without the cloud. And the cloud, in turn, is just a theory until you have a device that's both powerful enough to run apps that can take advantage of it and mobile enough that those apps are with you all the time, and working on your behalf.

But "mobile first, cloud first" also has ramifications for the ways in which the software we use is updated. As we've discussed in the past, the new "rapid release" model that Microsoft employs across all of its major platforms really changes things. And it's perhaps not surprising that we're seeing some pushback from IT as a result.

"Mobile first, cloud first" also provides a hint about how Microsoft intends to add functionality to its products going forward. Which is to say that it will happen with mobile solutions first—standalone mobile apps in Windows, Windows Phone and other platforms can easily be updated, even daily if needed, whereas OS components cannot—and it will happen in the cloud first, where Microsoft's cloud services—Office 365, Azure, Intune and so on—will be updated first, before any on-premises solutions.

In fact, it's possible—likely, really—that the on-premises versions of some Microsoft products will never be updated to match what's possible in the cloud, and for a variety of reasons. One is time to market, where it's easy to both release and then update cloud services, whereas ensuring that on-premises solutions are deployed and updated is more difficult. And another is just simple business applicability: When you're designing for the cloud, the resulting solution doesn't always make sense for on-prem.

We've discussed how these changes have impacted Windows, with Windows 8 going from a three year life cycle to a one year cycle with Windows 8.1 and then a four-month cycle with Update 1. (A similar pending Update 2 could ship as soon as August too.) But this isn't just about Windows. Office is updated regularly, both in the cloud (the various Office 365 subscriptions, the Office Web Apps and so on) and on PCs and devices. Windows Intune just got its second major update this year. Azure is updated, what, hourly now? It's a never-ending cycle of releases.

So we get pushback. I've heard from many readers that they don't necessarily want Microsoft updating their software this frequently. Something as innocuous as decoupling apps from the OS in Windows Phone 8.1 could in fact impact the underlying reliability and performance of the platform. I'm not entirely sure that's true—after all, users receive new app updates on every smartphone, regardless of platform, every single day, and that seems to be working out just fine—but getting IT to be comfortable with the switch from their monolithic (powerful yet complex) management infrastructures to something more akin to pure mobile device management (MDM) is going to take a lot of time and a lot of communication.

And this brings me back to my comments about Windows Vista and service packs. For all the changes in the industry since those suddenly old fashioned days, this much is still true: All it will take for Microsoft to completely lose the faith of its customer base, especially with enterprises and big businesses—is for it to utterly screw up a single update to an important platform. And because these updates are now flying out the door as fast as Microsoft can compile them, the chances of that happening are exponentially higher than they were back in the day when we could expect a service pack once every year or so.

Don't get me wrong, years of experience delivering security updates (and, more recently, firmware updates for Surface) have certainly improved the quality of these Microsoft updates and provided them with valuable experience. But it's just going to take one. And when the inevitable does happen, we're going to find ourselves back at square one again, debating the merits of "mobile first, cloud first."