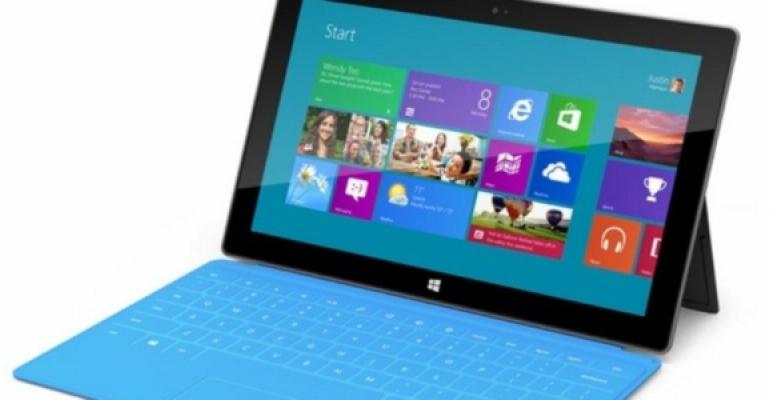 When Microsoft launched its Surface with Windows RT last fall, we were all pretty excited here in theWindows IT Pro offices. It was nice to see the company we write about come up with a tablet that would compete with the Apple iPad while offering an intriguing new Windows experience. But, to date, no one in the building has actually purchased one. That seemed strange at first, but the reason is pretty clear: We were all waiting for the more powerful Surface Pro.

Due February 9 (and just now debuting in floor models at Microsoft stores), the Surface Pro—officially, the Surface Windows 8 Pro—is in many ways the culmination of what the “Surface” promised when it launched. Powered by an Intel Core i5 chip, the Surface Pro combines the capabilities of a laptop with the convenience of a tablet device. It will run all Windows 8 applications as well as current Windows 7 desktop applications. It’s the best of two worlds, from the perspective of a power user, and many people have been eagerly awaiting its debut. We knew it was coming three months after the Surface RT launch in October 2012, so when January 2013 rolled around, Twitter went insane with impatient consumers.

Slowly, information about the forthcoming Surface Pro began to, ahem, surface. We heard rumors in international markets that it would be priced fairly high—and indeed, official pricing later revealed that it would start at $899 for the 64GB model, and go up to $999 for the 128GB model. Consumer reaction ranged from disappointment to acceptance to mocking anger. You can always count on knee-jerk reactions across social media, but the consensus among the more sane among us was that, given the capabilities of the Surface Pro, pricing seemed right in line with—and even seemed to undercut—the competition. But add on the necessity of a Touch or Type Cover (at over $100), and there’s no denying that the Surface Pro is a pricey piece of hardware.

So, a hefty price tag was something potential Surface Pro buyers anticipated.

Then came news that the device’s battery life would be “about half that of Surface RT.” For Microsoft to boast the inclusion of that powerful Intel Core i5 processor (giving users access to the full Windows 8 experience rather than the app-based Windows RT experience, which is more akin to that of the Apple iPad), the Surface Pro is a tad bulkier and also designed necessarily around a fan-based chassis. Word is that the fans are quite silent, and that the device doesn’t run particularly warm, but a powerful processor and the existence of fans mean that battery life suffers. The result is that Surface Pro appears to be a tablet that lasts about four to five hours on a charge. That’s low for a tablet—there’s just no getting around it. But, again, given the capabilities of this device, a hit to battery life is understandable.

So, battery life is another issue that potential Surface Pro buyers have come to accept.

But then last week—just after the official announcement that Surface Pro would debut February 9 (a little more than three months after Surface RT)—came the news that the device’s storage numbers aren’t quite as generous as advertised. Apparently, the 64GB model eats up fully 65 percent of that space with the OS, a recovery partition, and some other items, including an Office 2013 trial. In essence, the base model would have only 23GB of usable space, and the higher-end model would offer only 83GB of usable space. Understandably, many people cried foul. Admittedly, it was my first reaction. When you buy a computing device that advertises 64GB of memory, you expect that at least the vast majority of that amount is available for your own storage use. However, given a little more thought, it’s clear that the issue is more complex than that. Not only are we living in an era in which physical onboard storage doesn’t mean nearly what it used to (thanks to the rise of cloud storage—Microsoft SkyDrive, in this case), but the Surface Pro also offers almost unlimited connectivity, meaning that data can always be cleared out and offloaded to external storage. It’s a new mindset for tablet computing that many of us still have to become accustomed to.

So, storage space is the biggest concern attached to the forthcoming Surface Pro (so far). Is it one that potential consumers can accept? Or are there already too many perceived “disadvantages” to this device?


As I write these words, we’re a week away from the launch, and I admit that I’ve backed away from “immediate preorder” to “cautious optimism.” Before I buy this expensive piece of equipment, I want to spend some time with it. Hold it in my hands, put it through a few motions. And read some more critical reactions from people I trust. Because I’m sure a few more wrinkles will be brought to light within the next 5 days. Time is short, but time will still tell.

All that being said, I’m still excited as hell about this new category of device. As I’ve been studying the tablet market, I’ve been waiting for exactly this kind of powerful, work-ready device that’s “just as at home in the boardroom as it is the family room,” as Microsoft puts it. The Surface Pro “delivers hours and hours of entertainment with plenty of power and productivity to get your work done as well.” I’m jazzed about full application usability, and I’m excited about the inclusion of the Surface Pen—a terrific addition for writers and designers. And let’s not forget the simple matter of USB and HDMI connectivity. (You can even resolve a lot of that storage snafu by simply removing the recovery partition to an external drive.) The Surface Pro remains a new tech category worthy of our appreciation, and I still look forward to its march into the suddenly crowded marketplace.
1 comment
Hide comments
Related