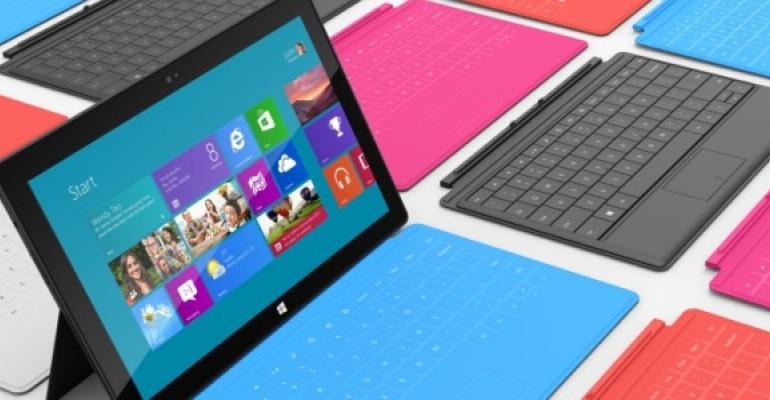 First impressions of the more powerful tablet are positive

For not being an official participant at the International Consumer Electronics Show (CES) this year, Microsoft sure has been a ubiquitous presence! Third parties have been debuting Windows 8- and Windows Phone 8-powered devices left and right, and CEO Steve Ballmer even showed up for the Qualcomm keynote address, championing his company's wares. And now, as Microsoft's partners are touting their own many-faceted Windows 8 tablets and Ultrabooks and laptops and all-in-ones, Microsoft has provided a sneak peek at its own eagerly anticipated device—that's right, the Surface Pro.

Several journalists had a chance to play with and test the device, and here are those early, largely positive impressions.

Tom Warren at The Verge had this to say:

"Surface Pro has a gorgeous 10.6-inch ClearType Full HD Display that outputs a 1920 x 1080 resolution. I say it's gorgeous because this display is unprecedented on this type of device. Text reproduction and colors were spot on and viewing angles were great for tablet use. Aside from the resolution, Microsoft has packed in 10 points of multi-touch support and active pen input. The pen snaps magnetically to the side of the tablet and it has a small ridge that slots into the charging port. This magnetic charging port has been greatly improved from the Surface RT, it's a lot stronger and it's noticeable when you remove the pen or slot the charging cable into place."

Sam Biddle of Gizmodo had this to say:

"[Surface Pro] is a real computer, and Surface RT was not. If you don't like a native Windows 8 app, you can kick it over a cliff and download one of the bazillion alternatives available for x86 Windows systems. Almost all of the things you need for work and unwinding. Tons of choice. Tons of flexibility. The Pro model is powerful enough to drive a big, luxurious external monitor. Add in a Bluetooth keyboard and mouse, and you've got yourself a new desktop. Or stop mirroring, lay the Pro down flat, and use the entire thing as one big wonderful trackpad, with ample room for your fingers or a pen for Wacom-style artistry. The addition of a USB 3.0 port makes the prospect of desktop replacement even more real, and slurping over a batch of JPEG + RAW photo files straight off a DSLR and then viewing them on the big external screen was a joy."

Dana Wollman of Engadget had this to say:

"In making the move from the Surface RT to the Surface Pro, we step up from 1,366 x 768 resolution to 1080p. Same 10.6-inch screen, just a lot more pixel density. And believe us when we say the difference is appreciable. In a side-by-side comparison with the RT, everything looked a little sharper, a little less pixelated. The "S" in the word "Start" on the Start screen, for instance, is thinner, less jagged than on the RT. It's a difference anyone can appreciate, even people who swear they're not display snobs."

"What Microsoft is delivering with Surface Pro is a laptop that's also a tablet (in a similar way, the Surface RT is a tablet that's also a laptop). It's shaping up to be the Tablet PC done right, with a mix of hardware and software that should make it attractive to many users — and at an ultrabook price point ($899 for 64GB of storage, $999 for 128GB—not including keyboard covers)."

These previews have us even more excited about the end-of-January release date.