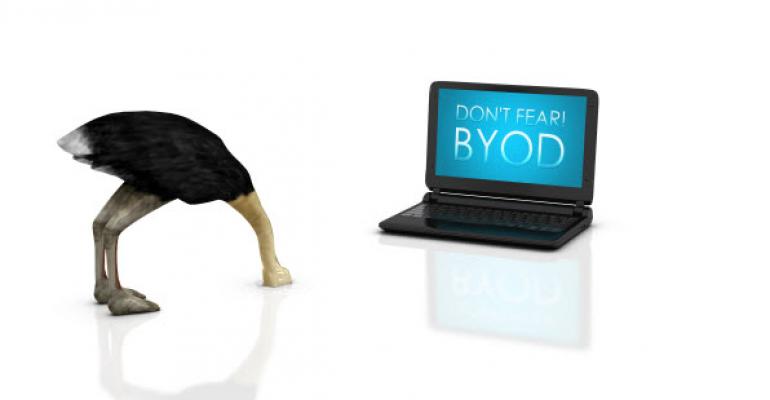 The news is growing daily that the BYOD movement may be a flop, and companies are looking for an alternative. One such alternative is actually a throwback to what made sense in the first place.

Earlier, in The BYOD Risks are growing. Businesses Don’t Care, Says Symantec, I talked a bit about some new risks associated with BYOD that are just now being realized as compared to survey results that Symantec has posted.  The survey results were based on feedback from their recent Symantec Vision conference in Las Vegas.

Like Cloud and Big Data, BYOD is one of the industry buzzwords of the moment, giving way to allowing employees to use their own devices to access the corporate network. The primary intent was for cost savings, providing a way for companies to shirk the responsibility and cost of buying corporate-approved devices as part of the employment package. And, in most cases, BYOD allows employees to choose whatever device they want to use, which somehow relates to better employee satisfaction and happiness.

As time has passed, many risks and problems have arisen. Security, privacy, and even new legal concerns have halted BYOD implementations in many companies. Industry vendors, intent on making money in this new market, pushed a lot of CEOs, CIOs, and CTOs into moving ahead with implementations before many of these issues were even realized, and definitely before any of the issues had resolutions. It’s like planning a trip without checking the route first, only to find out halfway to the destination that a primary bridge has never been built. (I could use an iPhone 5 Maps example here, but that’s old news).

The news is growing daily that the BYOD movement may be a flop, and companies are looking for an alternative. One such alternative is actually a throwback to what made sense in the first place. Philippe Winthrop, VP of corporate strategy at VeliQ, has taken the original concept of corporate-owned devices and just changed it a tiny bit. He has also given the BYOD alternative its own name: Corporate Owned, Personally Enabled (COPE).

COPE is the “best of both worlds”, keeping ownership of the devices in the hands of the company, but loosening the grip of corporate policy to allow employees to use the devices for their personal life. If this BYOD alternative interests you, check out the interview with Philippe:

Corporate owned, personally enabled – better than bring your own device?

1 comment
Hide comments
Related
Sponsored Content
The Need for IT to Get in Front of the BYOD Problem
Jan 03, 2013