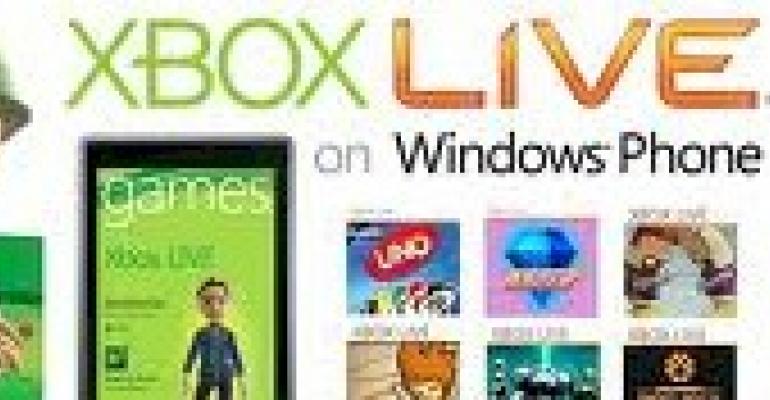 icrosoft has big plans for Xbox Live, which it hopes will be a major differentiator in the smartphone space, luring game enthusiasts toward its Windows Phones handsets and away from the iPhone and Android-running competitors.

In June it offered glimpses of the fixes and finesses it has made to the Game Hub in Mango. And at the Gamescom conference in Germany yesterday, it unveiled 14 new Xbox Live titles coming to Windows Phone in the next few months, as well as a handful of new features. These include "Avatar Awardables," badges avatars can pin to their sleeves to show off what they've done; parental controls; better syncing for multiplayer or turn-by-turn games; and "Game Add-ons" that players can purchase using Microsoft Points.

"In the months ahead, keep your eyes out for more titles in Marketplace that let you buy in-game add-ons and downloadable content like extra weapons or levels," Microsoft's Michael Stroh wrote in an Aug. 16 blog post.

Studies have shown developers to be increasingly interested in in-app billing, as it becomes a more primary source of revenue than app sales. It has been suggested, too, that that a primary motivator of RIM's purchase of Scoreloop was the company's in-app billing capabilities. (MDP: RIM Purchases Social Gamer Scoreloop, Gains In-app Billing)

As Microsoft hustles to build up its app portfolio and attract new developers to the platform (MDP: Microsoft Offers Kid Gloves to Android Developers Willing to Talk Windows Phone) Xbox Live may prove its ace in hand: a ready base of subscribers, a shared platform between phone and console through which to sell apps, and credit card numbers already on file.

Even iTunes had to start somewhere.