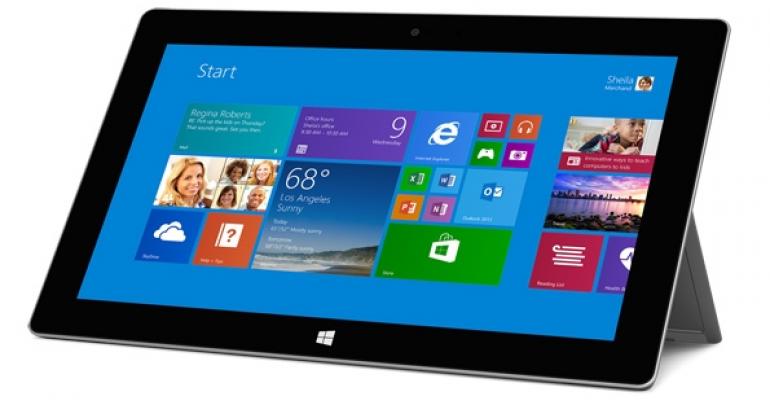 Windows 8.1: Awesome, but Still Not Ready for Typical Consumers

A little over a year ago, I predicted that Microsoft’s initial release of the Surface RT would be a train wreck. A $900 million markdown and lackluster market reception proved me right. Fast forward to today, and although Microsoft has made some serious and notable improvements in their bid for the tablet market, I’m sadly of the opinion that Windows 8.1 is still lacking -- and still not quite ready for prime-time when it comes to typical consumers. But before you dismiss me, hear me out. I don’t think that Windows 8.1 is a total failure by any stretch of the imagination. I just think it suffers from a couple of major problems that are, strangely, most predominantly felt when used only on tablets.

New Hardware and a New Outlook

If I’m honest, I haven’t been too interested in Microsoft’s latest, official, foray into the tablet space with the Surface 2. In my mind, these specific tablets are overpriced and will be until Microsoft can do even a moderate job of explaining what the benefits of a Microsoft tablet are. We’re barely starting to see ads that actually have substance in explaining the Surface’s features instead of focusing on stupid dancers, but it’s likely that typical consumers still have absolutely no idea why they’d want to countenance ideas about a Surface 2, let alone pay more for one than a decently-provisioned iPad.

Despite my specific misgivings about Surface 2 pricing, I recently purchased a Dell Venue 11 Pro. Recent hardware improvements, such as faster processors with better battery life and improved displays, have helped make recent entries into the Windows tablet market much more enviable. But, to what should be Microsoft Marketing’s everlasting shame, the real reason I even became realistically interested in a Windows tablet was due to Sean Ong’s review of his Surface 2 unit on YouTube, which I discovered in a tweet from Scott Hanselman:

The first 5 minutes of this random guy's video are better than all other Surface ads combined. https://t.co/XsiAKAMwFR

Prior to this review, I had absolutely no idea that built-in voice control with Windows 8.1 existed. I had also missed all of the parental control improvements that shipped with Windows 8. But thanks to Sean’s review, I saw all of this and more -- and quickly got excited.

My Initial and Brief Experience with Windows 8.1 on a Tablet

Despite all of the improvements that I think Windows 8.1 brings to the table, I still found it seriously lacking this week when my tablet first showed up. With the caveat that I’ve only played with this new tablet for all of 30 minutes so far, I found a few things to be disconcerting.

First, I found it much harder than I would like to admit in figuring out how some of the gestures that I’ve become used to on my desktop worked on a touch-only device. I also spent a long time trying to figure out how to search through applications in the Start menu. On my desktop I just pull up the Start menu and start typing. On a touch-only device, there’s no way to launch the digital on-device keyboard, and I more or less accidentally figured out that I had to swipe down to get a list of all apps below the Start Menu, where I could then easily search.

I also found other gestures and interactions more confusing than they needed to be. For example, the camera app lets you swipe left to look at previous photos and videos, and you can pull up a context menu to modify or delete photos by touching the screen for each photo. The problem with this is that the same gesture on a video starts and stops it. Swiping up from the bottom ends up giving you the context menu for both photos and videos.

I also spent way too long trying to figure out why ‘right-clicking’ (i.e., touching the screen for a long time) in the Kindle app wouldn’t bring up the same context menu I had already found in the Kindle app I had long ago that I had installed on my desktop. In the end, although I could ‘right-click’ on the desktop without any problems, I just couldn’t get this to work in the Kindle app. It wasn’t until much later that I realized and learned that swiping up from the bottom was the way to make this functionality appear, at which point I think I actually fell in love with this new device.

With discoverability issues aside, one of the first things I wanted to do with this new tablet was to quickly optimize aspects of it using some of the tips that Scott Hanselman outlined in his recent tutorial on managing multiple full screen windows. Ironically, although I was able to easily manage multiple full-screen apps and even customize my Start menu, I found that there’s simply no way -- without an external mouse -- to close or minimalize applications as Scott showed in his video.

It probably sounds petty of me to outline problems that I had discovering how to do simple things with a Windows 8.1 tablet within the first 30 minutes of ownership. To be clear, I’m not disillusioned or disappointed with this device at all. The hardware is sound, it bristles with ports, such that the mere presence of a USB 3.0 slot is so awesome that I just can’t handle it, and I already see myself falling in love with this tablet that I primarily got for my kids.

But that doesn’t change the fact that I can’t shake the feeling that Windows 8.1 on tablets without external mice and keyboards, won’t cause some serious consternation by typical end users were they to pick up one of these devices on a whim. Discoverability of gestures is mostly haphazard and accidental at best, and there’s no introductory video or presentation when you first start using the device that tells you how to operate it. A simple 90-second tutorial would go such a long way it’s effectively criminal that there’s nothing like it baked in -- localization and other efforts be damned.

What perplexes me most about this Windows 8.1 tablet most of all is how it feels like it suffers from a bit of a split-personality complex. No, not in the same tired way people complain about desktop versus metro, but in the way that some of the new features and benefits of Windows 8.1 for desktop users aren’t available when using a touch-only interface, such as being able to suspend or terminate full-screen applications or place three full-screen applications side-by-side.

To me, the lack of these features feels pretty strange. Strange in the sense that one of my biggest complaints about the transition to Windows 8 is that much of what I’ve initially disliked has been due to what I’d call Microsoft ‘dumbing down’ Windows so that it’s easier to use on mobile and touch-only devices. So when Windows 8.1 provides fun, new, features that appear to only be available for desktop users, then that makes me feel like Windows 8.1 still doesn’t know if it’s focused on touch-only experiences or desktop experiences rather than trying to equally target both. Ultimately, that seeming problem of dual personalities actually makes a ton of sense given Paul Thurrott’s recent synopsis of the ongoing battle within the Windows group on the future look and behavior of what Windows will be.

The problem, however, is that while Microsoft fights internally to figure out what the future of Windows will shape up to be, there are some decent usability issues that I think power-users will be able to navigate just fine. However, I still believe that typical consumers will find navigation frustrating to the point where I just can’t see how Window 8.1 tablets are truly ready for prime-time among non-technical users compared to devices such as an iPad or Kindle.