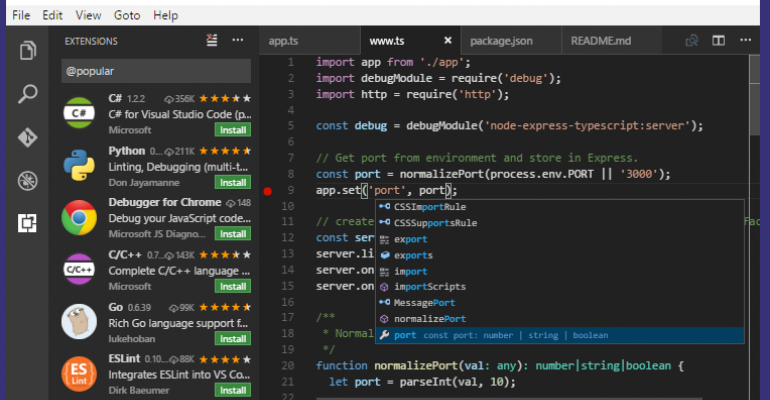 At Microsoft's 2015 Build conference for developers, the company announced a new cross platform code editor that runs on Windows, Linux and Mac devices.

The Redmond company describes Visual Studio Code as a streamlined code editor with support for development operations like debugging, task running and version control. It aims to provide just the tools a developer needs for a quick code-build-debug cycle and leaves more complex workflows to fuller featured IDEs.

That release happened almost 20 months ago and since then it has continued to be developed through its own VS Code Insider Program for testing updates and bug fixes before major updates are released to end users.

It has been a while since we took a look at VS Code and its latest batch of updates so with the recent release of version 1.7 in October we though it was a good time to catch up with VS Code.

According to Microsoft, here are some of the features that were added/updated in October:

Visual Studio Code is also supported by an extensive collection of extensions in various categories such as debuggers, formatters, keymaps, languages, snippets, and themes.

Recently, Scott Hanselman from Microsoft shared some of his favorite VS Code extensions if you are looking for somewhere to start.

If you think the free open source Visual Studio Code might be a tool you can use for your development projects then make sure you check out the projects documentation and Frequently Asked Questions.