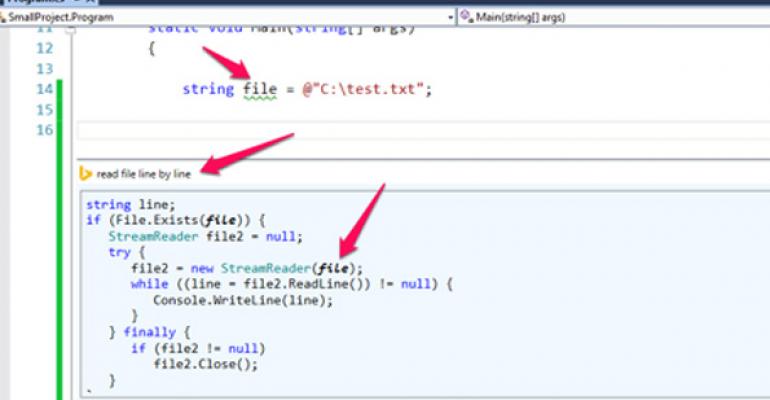 Does the following scenario sound familiar? You're in the zone, churning out code, and you've just run into a problem that you're unable to answer. You step away from the IDE you're working in and turn to MSDN or StackOverflow for your answer through your preferred web browser.

That's the typical routine that any developer goes through when he or she encounters a problem during code development. Although most developers are accustomed to this method by now, it isn't necessarily the most efficient practice. In the end, you risk losing focus and productivity by veering away from the IDE in search of your solution.

Now there's an easier way to search for code solutions on the Internet. Microsoft has recently released the Bing Code Search for C# add-in for Visual Studio 2013, which makes it easier for developers to search across MSDN, StackOverflow, Dotnetperls, and CSharp411 without having to leave the IDE at all. Additionally, the add-in customizes the sample code snippets it finds with the variables that a developer is currently working on with their own code, essentially automating the process of customizing the sample code from the community website.

You can get started by downloading the extension for free via the Visual Studio Gallery. Have you already used the extension in Visual Studio 2013 already? What are your thoughts on it so far? Let us know through our social networks or in the article comments below!