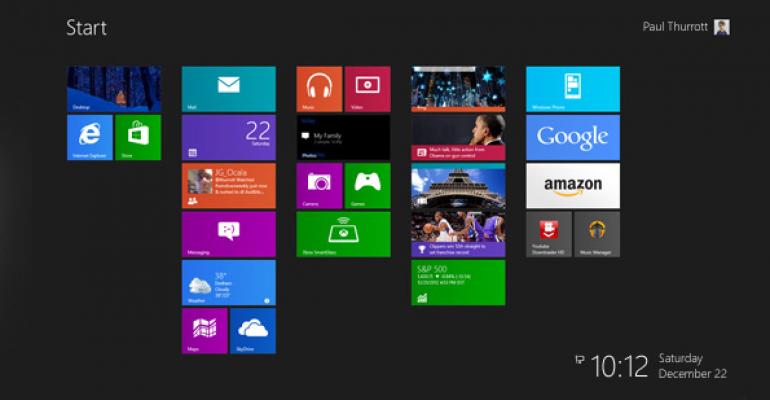 A little over a year ago I had some very negative things to say about the Surface. Despite a decent amount of negative feedback initially, time has validated my argument that the initial release of the Surface was a disaster. Fast forward to today, and I’m actually writing this post on a Windows tablet in a plane as I make my way to South Africa.

How I Ended Up Owning Two Windows Tablets

My initial complaints and worries about the Surface, and especially the Surface RT, had nothing to do with the value or need for a Windows tablet but, instead, were focused solely on problems with Microsoft’s execution. After deciding that I’d want some sort of portable PC-based tablet for my kids and to potentially take with me and my family to South Africa, I decided to give the Dell Venue Pro 11 a try.

What I found patently amazed me. With excellent hardware, a great price point, along with the ability to run full-blown Office and Windows, I began thinking of how useful a tablet that wasn’t an appliance (like my iPad mini) could be. More importantly, the more I used this device, the more I began to realize how and why some of the things I hadn’t been so excited about with Windows 8 came to be. Even better, I could easily spot some of the improvements that are enabled by Windows 8.1 (i.e., as an upgrade from Windows 8 for tablet UIs). Better yet, I even found myself really liking the Windows 8 UI and found it insanely intuitive -- despite the fact that as intuitive as the Windows 8.1 is, it’s not very discoverable.

Within a few days of purchase of a Dell Venue Pro 11, I couldn’t help but start thinking about buying a Windows tablet for myself. Only, I’ve always hated the larger form factor of the iPad. And although the Dell Venue Pro 11 isn’t the same shape as the iPad, as it favors a landscape orientation, it’s still in the same size class so to speak. As such, I started taking a serious peek at the Dell Venue Pro 8, which is an 8-inch tablet that’s very comparable to the iPad mini in respect to size. Personally, I’ve thought that my iPad mini has been the best thing since sliced bread, simply because the form factor was so cool to the point where I hoped and dreamed of an iPad mini even before it was released. Therefore, when comparing my existing, but brief experience with the Dell Venue Pro 11 to the very favorable reviews I kept seeing of the Dell Venue Pro 8, I decided to swing one -- mostly as a trial (i.e., I was hopeful that it’d become my new go-to tablet for a while -- even though I was a bit skeptical if it would be everything I dreamed it could be).

Windows Tablets are Insanely Practical and Have a Great Future

Within days of getting my Dell Venue Pro 8, I was patently in love. To date, it has exceeded my expectations. My inner nerd is full-blown elated by using it. Moreover, one of the things I noticed about it just a few days after purchasing it was that this particular device was the #18 best seller in technology on the Amazon website. Of course, much of that is the price that I paid $235 to have this shipped to my door. But price would be nothing without value, and this device has value in spades.

Its processor literally runs circles around that of my old, comparatively junky, iPad mini. With an eMMC and 2GB of RAM, it actually performs very well. Office and other apps are all very responsive and fully functional. All in all, with a 1280 × 800 display, a great touch screen, and some decent horsepower with battery life that totally matches that of my iPad mini this device is like a cross between a much faster replacement for my iPad mini and a tiny laptop with the kind of power you’d expect from say, 3 to 5 years ago. Best of all, with the ability to slap in Micro SD cards and a full-blown USB port, I’ve been tickled pink with this device. I even managed to install Visual Studio 2013, which amazingly actually works well enough when complimented with an external mouse and keyboard though it is, obviously, a tiny bit slow when switching into debug mode and so on.

Overall, this device is a fully functional PC when and where it needs to be. Otherwise, when it’s not a workhorse, it works as a solidly-capable tablet. The app store is still quite a bit of a train wreck in terms of how few, good apps there are and how some apps that exist from bigger names and brands feel a bit second rate compared to offerings on other platforms. But all of that doesn’t feel like much of an issue because this device is first and foremost a mini PC and a tablet second. In other words, there isn’t a Dropbox app, nor is there a Spotify app, but I could care less because I’m running the full version of both on my PC. All of that said, I’d probably not be very excited about this device if the Kindle app weren’t as mature as it currently is, even though it’s still sorely lacking in some key ways.

Of course, this device isn’t perfect -- and there are some quirks and weaknesses, such as very minimal onboard storage. But, overall, I find it and Windows 8.1 to be very functional, very capable, and very fun to use. More importantly, I just can’t help but think of what the future has in store for these devices. Both Dell Venue Pro models are a great value, and the Venue Pro 11 comes with a full-blown USB 3.0 slot, making it insanely easy to dock and convert into a PC if and when needed. Personally, I can’t wait until 8-inch devices like the one I’m trying this on get a bit more horsepower, more storage, and the ability to rock a USB 3.0 slot. Until then, I’m more than happy with this tablet and how inanely versatile and functional it is.