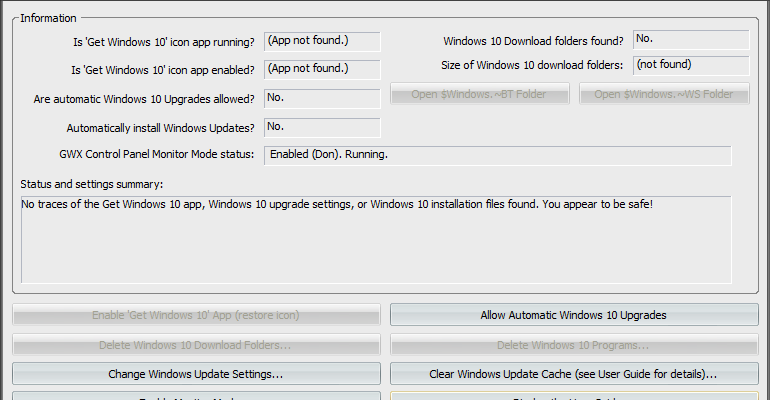 In the latter part of 2015, here on DevProConnections I wrote a mildly tongue-in-cheek open letter to Microsoft about their over-the-top efforts to move the world to Windows 10: Broken Trust with Windows Update. I had no illusions that it would make any difference, but it was good to get the message out anyway. At that time, I thought we had seen the worst of things, but I was oh, so wrong.

As soon as Microsoft started delivering Windows Updates that were marketing nag messages to move people to Windows 10, system geeks of all stripes started poking at the problem and came up with myriad ways of getting rid of the Get Windows 10 (GWX) marketing message on our desktops. Initially, the easiest way was to uninstall the KB3035583 update. That link to the KB article, by the way, says that the update “helps users understand their Windows 10 upgrade options and device readiness.” Apparently, helpful understanding comes in the form of an annoying message in the notification area.

But uninstalling and hiding that update didn’t last as a solution for long. Microsoft soon made the update available again, ignoring the intentional hiding by users. As someone who used to believe that an updated system was a more secure system, I generally used to install all updates automatically--although briefly reviewing them first. This act of sabotage broke my trust in their update system. Thus the name of my previous article I referenced above.

And now Microsoft has gotten even more aggressive, so that few if any of the workarounds work anymore. Now, I get that Microsoft really, really wants us to update to Windows 10. I mean, we all remember the security debacle that Windows XP still is, so the world will be a better place once that version has disappeared from use. But Windows 8.1 and even version 7 are still eminently usable and are still supported with security updates (Windows 7 mainstream support ended January 13, 2015). I’ve moved to Windows 10 on my desktop machine, since I had to rebuild it when the system drive died late last year. But I’m still happily running 8.1 on my laptop, and intend to stay with it for the time being.

I won’t rehash the many reasons not to want to go to Windows 10; you can Google and even Bing the topic to get an exhaustive list, foremost of which are privacy concerns. I’m tempted daily to finally make the move to Mac OS or Linux, and run Windows non-10 in a VM for things only Windows can do. But I’m not there yet, despite otherwise loving my MacBook Pro with OS X that is now so less in-your-face than Windows. Yet I’m torn, since I make such a good living with Microsoft products. Sigh.

So I need to keep Microsoft’s Windows 10 fetish off my laptop for now. I briefly despaired of doing that in the face of Microsoft’s relentless efforts, until Steve Gibson on his Security Now podcast (which is required listening for geeks interested in security) turned me on to GWX Control Panel from the Ultimate Outsider Web site. There are other such tools out there, but this one is free and works great. You can read Steve’s comments about the tool in the transcript of the Security Now podcast #537; go to that link and search for “GWX.”

Basically, the app monitors your system non-invasively for any of the signs of Get Windows 10 cruft and notifies you about it. So if you accidentally install one of Microsoft’s GWX updates, you’ll know about it and are saved the annoyance of Microsoft using your machine as a marketing tool. If Microsoft has already managed to download the multi-gigabyte Windows 10 installer, you’ll know about that too and can get rid of it.

The GWX Control Panel lives in your notification area and has the simple configuration dialog box shown below. There are some basic options you can set, but for the most part it just works with the default installation. As you can see, my laptop is safe and free from Windows 10. And the app is regularly updated, so hopefully it will stay on top of Microsoft’s changing tactics to infect your machine. 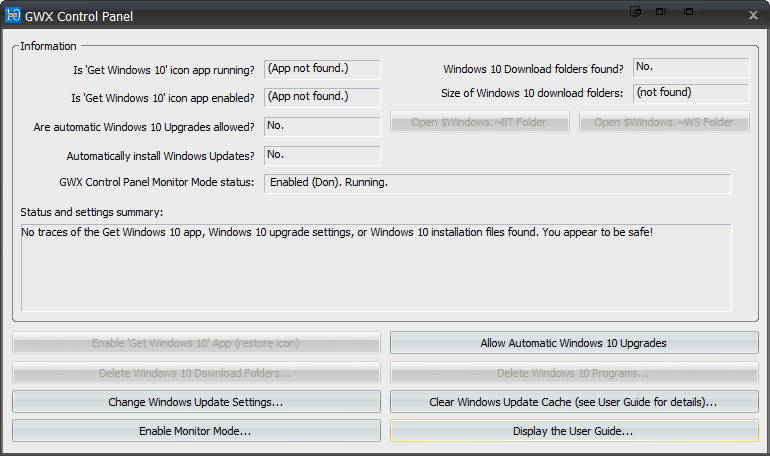 See the GWX Control Panel page for a complete description of what it does and how it does it (that link is for the latest version as I write this; check for updates). Then, if you’re on Windows 7, 8, or 8.1, and don’t want to go to Windows 10 anytime soon, go get it. And if you like it, send the author, Josh Mayfield, a tip!

The upside is that I’ve seen subtle clues that Microsoft has finally started to realize what a debacle they created and the damage it has caused to their reputation. Here’s hoping that they back off and stop with the heavy-handed push to move the world to Windows 10. It has some nice features, but there are an awful lot of annoying ones as well.