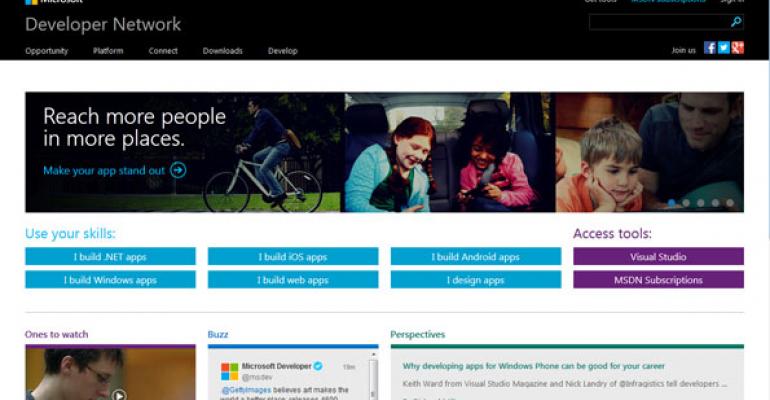 Back in the late '90s and into the early 2000s -- before searching was deemed the first and commonly accepted behavior for opening a web browser -- our homepages were our favorite website. Our homepage might have been a news site or something like that, but it definitely wasn't search engines such as Google or Yahoo (this is way before Bing existed).

For many of us in the Microsoft app dev world, MSDN was our homepage. These are back in the days when a group call Microsoft Developer Relations (DRG) owned the relationship between Microsoft and its partners who built solutions on the Microsoft platform. All forms of content existed on the MSDN site. MSDN was where we downloaded the source code from Vertigo Software's classic guidance application, FM Stocks. The MSDN not only provide us with API documentation to scour through, but the site also provided us with relevant source code examples to pore through.

Cue to today. Very few people would have MSDN as their home page. The search engines have gotten so good at meeting our needs. Unfortunately the content on the web hasn't been as good. But most of us caved and now have Google as our home page. Some of us have Bing. Either way, it's the norm to start today's web experience with an Internet search.

One of the most challenging things about the MSDN site, and any big content site on the Internet for that matter, is retiring old non-applicable content and keeping up with new relevant content. You can imagine the constant struggle of that challenge. You really need technical experts with some history to make the call on retiring or fixing content. I sure as heck don't want to get results based an older technology like classic ASP when I search on MSDN. . . but some people do want exactly that. Some developers are still working on classic ASP and would love to search effectively on 15-year-old technology.

DRG has gone through many different permutations throughout the years. Today, a group called Developer & Platform Evangelism (DPE) at Microsoft aims to serve a mission that's similar to the DRG group. The DPE group at Microsoft launched a new MSDN site on August 1. It's called the Microsoft Developer Network with a mission of "enhancing the experience to add better support for the growing number of developers that are embracing Microsoft's platform and technologies for the first time."

Since the website's release, it has been absolutely lambasted by the existing Microsoft platform developers who demand relevant content. And I find that negative passion really interesting. The new site is beautifully designed as you'd expect.

But if you want to piss off .NET developers, then put a button on the site that says, "I Build .NET Apps," and then have that button take you to a slew of content about building Windows 8 store apps and nothing about .NET. That's what the button did. I kid you not. Don't panic, it's been fixed.

When the new site launched, Brian Harry wrote a blog post that explained the new site to developers. Now understand that Brian Harry is a technical fellow at Microsoft. That puts him in Ander Hejlsberg's league. He's a big gun and technically brilliant. However, this blog post is now infamous and caused a firestorm of negative comments. If you're up for wasting 20 minutes, then read the multitude of negative comments in the link above.

And all the negative comments are still there. Brian Harry could have easily removed them. But that's the type of guy he is. Not only is Brian Harry technically brilliant, but he's also fair and honest. He's a genuinely nice guy. About a year ago I did a four-minute video interview with Brian Harry, which is ironically hosted on MSDN.  You can get a pulse of his personality by viewing that short interview.

So what does a typical executive do in cases like this? Well, they ignore it until it goes away. But not Brian Harry. Brian went on a mission to explain the thinking behind the site and fixed the legitimate problems that came from the community's feedback. His second blog post titled "Feedback on the refreshed Microsoft Developer Network" is now also infamous. And sure enough, it also has a ton of negative feedback to it. And I'm positive that Brian Harry is taking that feedback very seriously. That's the type of executive he is.

But I have to wonder what Brian and the DPE are saying internally. Because Brian himself said something really telling in his second blog post:

"…more than 70% of people come to MSDN through search. Most of the rest come through some web link – from a blog, forum post, etc. A comparatively small amount of the traffic comes to the home page."

So that means that all these people complaining are not seeing the homepage anyways. . . they come into MSDN through a link or search. And these people are consequently commenting on content that's not designed for them. These folks aren't the target audience. Brian clearly said in his first post that this page is targeted at new developers to the Microsoft Platform. Like the saying "all press is good, negative or positive," this type of passion and pride from the existing Microsoft developer community is good; even if it comes in the form of non-applicable and brutal feedback.

In his first blog post Brian said there were three goals they targeted with the Microsoft Developer Network experience: Simple, Relevant, and Community Driven. Well, they accomplished the first and third goals, but arguably missed on the Relevant goal one. But if you read between the lines in Brian's two very well written blog posts, then you can feel his own pride, passion, commitment to make the experience better and better. Time will tell. I think we all can appreciate the huge battle it will be to make all types of developers happy with that site. Honestly, I'm not sure it's possible.