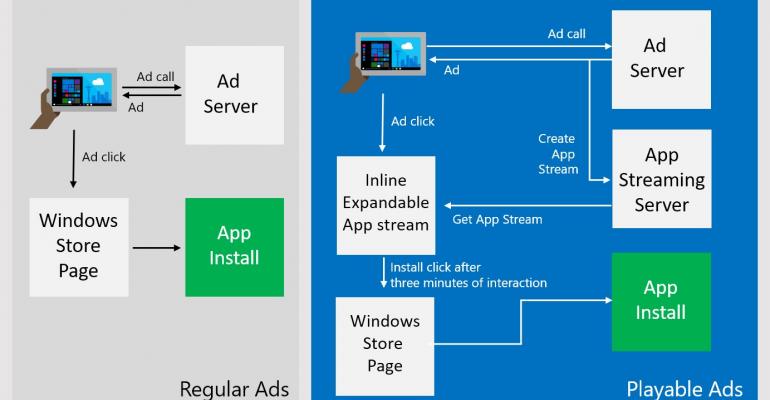 Everyday we install a lot of apps to our devices and usually it is based on viewing a set of static images, a product description from the developer, and sometimes word of mouth from friends and family. Many of those apps are then uninstalled because they did not meet our expectations.

Repeat the cycle until you find that perfect app.

Imagine being able to give potential users an interactive experience of your app that would let them use it just as if it was already installed on their system.

Well last week Microsoft announced the preview for their new Playable Ads format that is designed to give potential app buyers that hands on experience so they are more aware of how your app actually works and not just how it looks and is described.

Right now when an app developer uses a regular ad that then shows up in another Windows Store app, the user is taken to the Windows Store listing for that app.

Depending on the developer there are likely static screenshots from the app and a description however, these can of course vary greatly.

Now flip over to Playable Ads. When a potential customer clicks on one of these they are not taken to the Windows Store but instead they get that app in an expandable window as the app experience is streamed to them for three minutes.

Let's be honest - most of us decide if an app is for us in about that much time if not less.

By streaming this app the end users will experience it just as if it is installed on their system. Once the experience is over they will be presented with options to purchase/install the app.

According to Microsoft Program Manager Vikram Bodavula, this ad format has several advantages.

For devs who want to use this new ad format there is no action required on your part except to create an ad campaign that uses it as an option. Microsoft will handle the streaming aspect on their end.

This is a limited preview so if you are interested in giving it a try just send an email to [email protected].

Personally, I am looking forward to seeing these ads and what the streaming experience is like and whether users will be able to log in using their own credentials for a particular service to test the app.