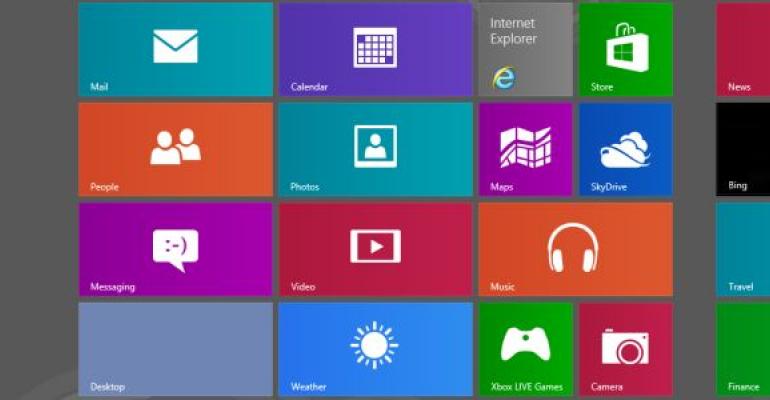 Microsoft Windows 8 Isn't as Bad as the Fear Surrounding It

Windows 8 is the harbinger of things to come

On one hand several usability experts and industry pundits have made it clear that they think Windows 8 has some serious problems. On the other hand, huge numbers of early Windows 8 adopters confess that even though there is a weird problem with the new OS having somewhat of a split personality, they actually think that it's a big improvement over Windows 7. Strangely enough, I think that both the early adopters and the pundits are right about their respective conclusions, even though that will take some explanation on my part.

Plenty to Love with Windows 8

As I mentioned in my article "Windows 8 for Luddites," I'm gradually working on the process of vetting a Windows 8 virtual machine (VM) for upgrade purposes. In doing so, I've found a lot to love even if I did have to jump through a few hoops to get there. However, the reality is that I was actually contemplating on skipping Windows 8. Despite this, I decided to take a look at the new OS because I saw a few early adopters that I follow on Twitter or interact with in newsgroups that kept saying great things about Window 8.

Although I do believe that Windows 8 does have a few weird problems, missing features, and capabilities, it's still not that bad. In fact, it's actually great in several different ways. Windows 8 isn't that much different from a typical Windows release in which we get some cool new features, and consequently we lose a few things that we used to love. Stated differently, not only can you make peace with Windows 8, but also you can actually find that it's a great upgrade.

Windows 8 is the Harbinger of Things to Come

Windows 8 is simply more than the latest version of Windows. It's also the harbinger of things to come -- a sneak peak of what could be the mind and will of Microsoft. With that mindset, there's plenty to be worried about when it comes to Windows 8. For example, the Windows Store, Windows 8's weird split personality, and its new focus on modern UI apps are something to be potentially worried about.

Granted, there might be nothing to be worried about with Windows 8. The Windows Store might be a net win for Microsoft in the sense that it will offer consumers a new or different channel for putting software on their device. However, some larger game studios have already made it clear that they aren't happy with where the Windows Store is headed. As a result, it doesn't take too much imagination to see how something such as Microsoft's recent spat with Apple over SkyDrive subscriptions from the Apple Store couldn't play out in other uglier ways for PC software shops and developers.

Of course, there's also Windows 8's split personality. Windows 8 is so severely oriented toward touch devices that it takes some getting used to on desktops, laptops, or workstations that aren't touch-enabled. Personally I want to see Microsoft continue to pursue the notion of making Windows easier and optimal to use from touch-enabled devices. However, I don't want to see Microsoft to try and pull that off using a stupid one-size-fits-all approach in which the company tries to dumb down my highly productive desktop by having the same user input as a small, thumb-driven phone. That's the same approach that Java took by reducing everything down to the lowest common denominator. As the joke goes, that's why Java runs slow on everything.

Stated differently, Microsoft's pursuit of modern UI apps provides some great benefits for touch-enabled devices. It also suffers from some mind-boggling problems in terms of user experience (UX). I'm talking about this from a touch-enabled device perspective, which is why I think that well-noted industry usability expert Jakob Nielson is correct in his argument about full-blown usability problems in Windows 8.

However, that's only a concern about the current problems of Microsoft's first foray into a brave new world in which touch and traditional Windows OSs are supposed to live side-by-side in eternal bliss. I think that Nielson hits pay dirt is when he says that Windows 8 betrays the entire Windows brand because modern UI apps overly fixate on a single window. Nielson makes a big deal out of this, and I think he should. In the same token, it's not that big of a deal for anyone using Windows 8 on a traditional PC these days. Granted, it is weird to launch the Windows 8 control panel and have it take up your entire primary monitor without any option for resizing or treating it as a traditional window. But hey, that's only one of those weird things that you get used to fairly quickly when working in Windows 8. It's also something that you largely ignore on the path to getting to new goodies that Windows 8 brings to the table.

Only once again, therein lies the problem: Windows 8 is only a preview of what might come. For example, I regularly rely on the fact that my workstation has three monitors to help make me more productive. For example, rather than having to switch tabs between different applications I can have Visual Studio open on my central monitor, unit tests running on my left monitor, and any website or apps that I'm developing on my right monitor, which is similar to using the power of multiple windows on multiple monitors to be more productive. In the same token, my productivity can also be shattered by virtue of the fact that I can also crowd Twitter and instant messaging clients on my right monitor, but that's my choice due to the flexibility that's provided by Windows. If the initial modern UI app trend goes forward, does that mean that we might have versions of Office, Visual Studio, or PhotoShop that span entire screens and remove options for productivity? If so, it's possible to see why some people might be freaked out by the fear of what Windows 8 could bring -- despite how easy to use and beneficial the new OS is today.