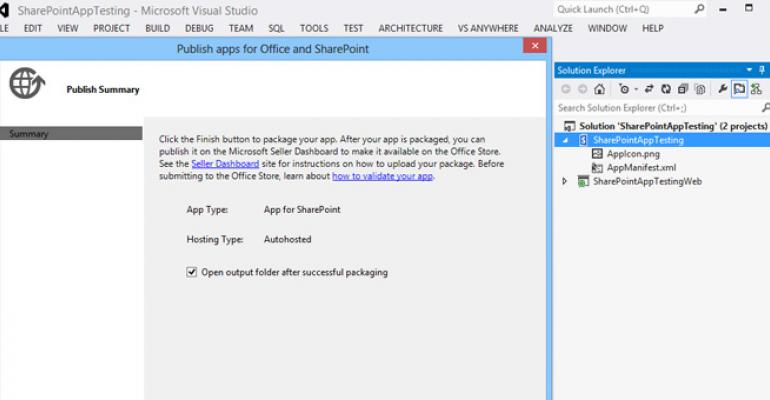 Microsoft released Office Developer Tools for Visual Studio 2012, which provides Visual Studio 2012 developers with the ability to create rich applications for Office 2013, Office 365, and SharePoint 2013. You can read the official announcement that was made Monday on Microsoft's Developer Tools blog. Additionally, the tools provide full support for SharePoint 2013 development.

Office and SharePoint apps are built on popular web technologies such as HTML5, CSS, and JavaScript. Not only can developers utilize their existing skills, tools, and languages to build apps, the new toolset also provides developers with the ability to deploy, update, and maintain their apps in the cloud. Developers can also publish and sell the app in the Office Store or distribute it within their organization.

To make applications available in the Office Store, developers need an Office 365 Developer Subscription, which includes a SharePoint Online Developer Site that's customized for creating and testing apps, in addition to a Microsoft Seller Dashboard account to make apps available to Office and SharePoint users. Microsoft is assisting developers with this need by adding a one-time 12-month Office 365 Developer Subscription for Visual Studio Premium and Ultimate subscribers. Eligible MSDN subscribers can activate this benefit by accessing their My Account page on the MSDN subscription website.

With this new application development toolset, developers can create a variety of task pane, content, or mail apps for Office and SharePoint users. Stay tuned for more information about the Office Developer Tools for Visual Studio 2012 from Channel 9, where the outlet will post a video later this week about the new tool set. In the meantime, the bits are available to download from Microsoft. Tell us, will you be developing apps for Office or SharePoint with Microsoft's new toolset? Let us know in the comments or reach out to us on Dev Pro Twitter, Facebook, and Google+ pages.