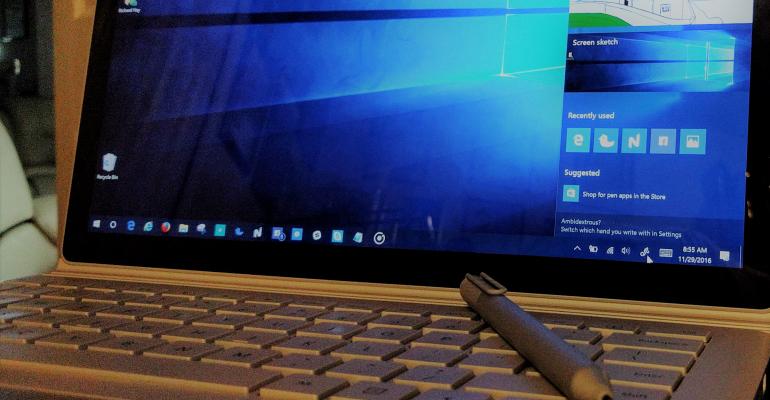 When Microsoft released the Windows 10 Anniversary update in August of this year a significant amount of work was done to make Inking, the use of a stylus/pen/finger for annotating on a devices screen was a very visual part of the update.

This included the new Windows Ink Workspace which provides a central area to access inking features such as Sticky Notes, Screen Sketch and Sketchpad.

If you are building Universal Windows Platform (UWP) apps then Inking is an area that can easily incorporate into your apps. It may also possibly increase the adoption of your application among users with touch screens and Inking capabilities on their Windows 10 Anniversary Update devices.

Microsoft has made it very easy to add these types of capabilities into your apps and in a recent three part series on Windows Ink at the official Windows Developer Building Apps site they are giving you the background and the code to do just that.

As mentioned, there are three extensive and detailed blog posts about Windows Ink and here is a summary for each one.

After an introduction on the history of Inking and Windows this article helps you understand the new ways that Inking can be used in Windows 10. It brings that information to you from the users perspective and the developers along with the code needed to easily implement some Inking features into your app such as using the Windows Ink Workspace, Ink Canvas API, Ink Presenter, Ink Toolbar and, the Radial Controller.

The second article in this Inking series for developers now goes beyond the basics and gets more detailed about building an experience for your app users that will keep them engaged with your app - this is a very code intensive blog posts and shows you how to incorporate inking features using pen interactions, storing and retrieving Ink data, and using Ink and Speech to build more natural user input to your app.

The final installment in this Inking primer for developers now moves beyond using Inking for drawing and explore other input methods that can be used with Windows Ink. Some of the possible options they explore in this wrap up include music composition, healthcare charting, and doctor's patient notes.

All of the code and API data is provided throughout these three articles to help you add these capabilities quickly to your own apps and along the way you might just come up with a great app idea that features Windows Ink that could fill a niche market that is yet to be addressed with technology like this.