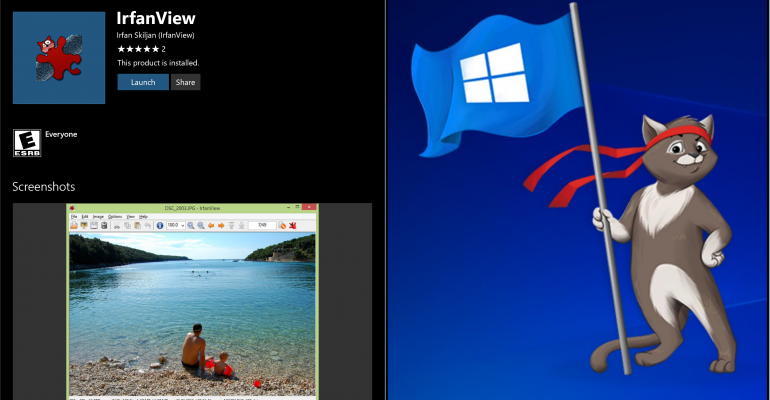 Last week one of my two favorite desktop image editing and handling programs, Irfanview, became available in the Windows Store.

The software's developer, Irfan Skiljan, responded to a few questions I emailed him over the weekend about the move to bring his popular software to the Windows Store and what that experience was like using the Desktop Bridge.

He started off by telling me that the Desktop Bridge, also known by its code name of Project Centennial, works pretty good but he feels like the normal desktop version of the software runs better.

His initial foray into using the Desktop Bridge began about a year ago when it was in the early beta stages for testing but some of the features for the tool were not yet implemented at that point. However, when he started the most recent work to convert Irfanview to a Windows Store app, he said it did not take much time to get things converted.

One thing he did have to do in the conversion process was to disable two menu options under the Help menu in the software:

The plug-ins (1) can not be used in the Windows Store version as he implements them in the desktop version because of they need registry access. He did indicate that there is a possibility of adding the plug-ins later, possibly as add-ons, so they can be available to Windows Store users as well.

The second (2) item he had to disable was checking his homepage for updates to the program. Since updates are received via the Windows Store for apps, even those converted with the Desktop bridge, the need to check the software homepage for updates is not necessary in the Store version.

When I asked Irfan whether he planned to add any additional Windows 10 type features to the app he said he was not sure at this point and did not consider an important element for getting the software into the Windows Store for now.

When I was at Build earlier this year, I talked to some of the members of the Desktop Bridge team and this software came up in our discussion because of its popularity. According to that representative, they had reached out to the developer and opened a dialog about using the Desktop Bridge to bring Irfanview to the Windows Store. Between the devs work and the teams outreach it seems it has had a positive result with the software now being accessible in the Windows Store.

By the way, one other piece of desktop graphic editing software also came up in my conversation with Microsoft at Build, Paint.net, and now today there are reports that the developer will soon be using the Desktop Bridge to bring that popular software to Windows Store in the near future.

Things are looking up for an app only existence on the Windows 10 desktop.