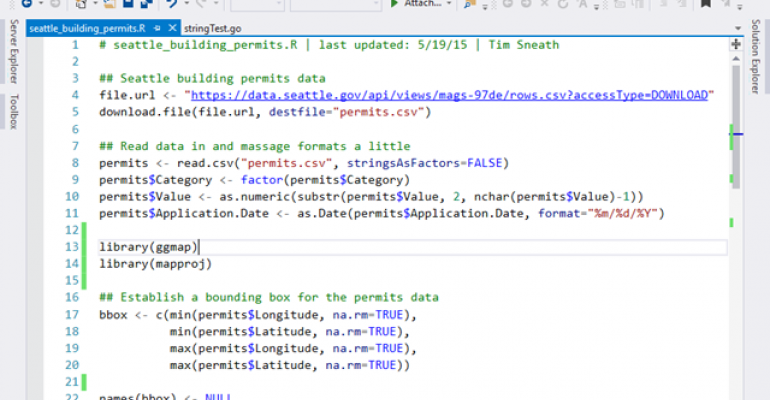 It’s Been a Big Couple of Weeks for Microsoft Development Technologies!

It’s been a big couple of weeks for the developer division at Microsoft, with a slew of releases and updates. And good times for developers who use Microsoft tools and technologies as well. I don’t think I can remember a time when so much has happened so quickly, at least not since the initial release of the .NET Framework. Microsoft made a lot of the announcements and releases during their Connect() 2015 online conference, but some have happened since then.

Here’s a quick rundown on what’s been happening.

The long-awaited, first major update to Visual Studio 2015 is finally here. This is major, and represents the maturation of Microsoft’s premier development environment. As Jeffrey Palermo recently discussed in Visual Studio 2015: Ushering in a New Paradigm, this version of Visual Studio is a huge change for the company. Instead of using the tool to promote the sale of Windows by supporting application development just for that platform, for the first time “Microsoft supports developing for platforms other than Windows.” The new slogan of “any developer, any platform, any kind of app” is apropos. And Update 1 takes care of a number of niggling issues with the initial release as well as adds many new features.

This release also includes a number of other technology updates, a few of which I’ll discuss here. You can find all the details in the first link above, but some of my favorites are new editor support for languages new to VS, the NuGet fixes and enhancements (although they don’t yet go far enough), incremental improvements to code analysis and the Diagnostics Tools window, and, of course, bug fixes.

There are also a lot of enhancements for managed languages, including new code editor features. Lots to explore there, as Microsoft makes Visual Studio ever better for writing code.

Probably best of all, they fixed the licensing issues where VS nagged too many developers about updating their license prematurely. But you’ll need Internet connectivity to keep it unlocked, and they still haven’t fixed the need to log in far too often. Sheesh. Loosen up, Microsoft! Not all of us are pirates!

This release isn’t a major update, but it has some significant improvements. Quoting from Microsoft’s announcement, the key updates include:

There’s nothing too earth shattering here.

TypeScript is Microsoft’s solution to the mess that is JavaScript (which is vastly improved in ECMAScript 2016, but still). TypeScript is a transpiler that makes JavaScript a typed superset of standard JavaScript, making it far more usable for enterprise-class applications. Even Google is using TypeScript. The major updates here are that it enables async/await by default for ECMAScript 2015 targets, supports polymorphic this typing, support for the proposed ECMAScript 2016 exponentiation syntax, and module targeting. Some esoteric stuff, but it’s great what Microsoft is doing with TypeScript. The repository is on GitHub.

This one is not as momentous as other updates I’m covering here, going from beta releases to a release candidate. But the Go Live license is big, since it means that Microsoft is done--or at least thinks it’s done--with breaking changes, and can focus on getting it done for a 2016 Q1 release. Best of all, it includes .NET Core, so you can start working on sites hosted on Mac OS X and Linux and Microsoft will support you. (I’m in awe as I type those words!)

By the way, if you grabbed the initial release of RC1 on or shortly after 11/18/2015 and had trouble installing it, Microsoft has released an update that fixes three issues.

Ironically, the Visual Studio 2015 Update 1 installs a stub for ASP.NET 5 Beta 8. That’s pretty disappointing, and it seems like a company with all of Microsoft’s resources could do a better job of coordinating that, since ASP.NET 5 RC1 came out before the update to Visual Studio. Oh well, easy enough to remedy on my development machine.

The new beta (actually, there were three releases on November) continues to improve this nice alternative to Visual Studio, particularly if you’re using other supercharged code editors like Sublime Text and other tools. As with most Microsoft open source code, the code is on GitHub. I haven’t yet fully grokked Code--I have to spend more time with it--but am slowly starting to see how marvelous it is.

As a final note, even though it is not a Microsoft technology, I would be remiss to mention that Aurelia has finally entered beta (check out the series of Aurelia Beta Week posts at that link). Julie Lerman has a couple of nice articles on MSDN here, here, and here about getting her head around Aurelia that are well worth a read.

If you missed Conned() 2015, Scott Hanselman has a recap blog post with links to the presentations. Those will get you up to speed quickly about this tsunami of technology updates. It’s a great time to be a software developer!