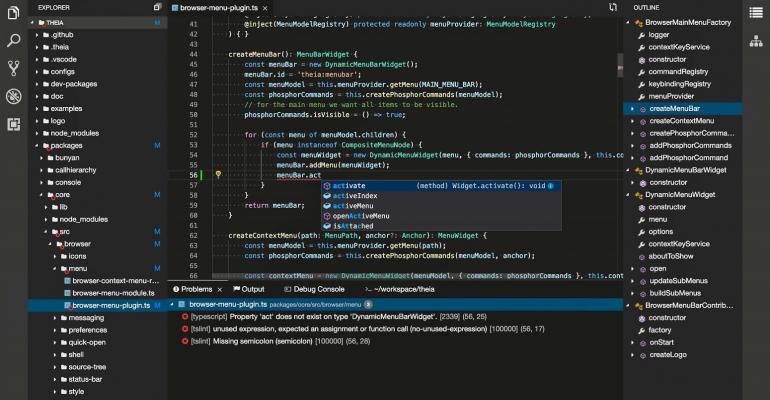 The open-source effort hits a major milestone, as the Eclipse Foundation takes aim at providing a stable competitive alternative to Visual Studio Code.

Started by Ericsson and TypeFox, Eclipse Theia has been in development since 2016. The goal of the project is to have an extensible platform to enable both cloud and desktop IDE tooling. Theia is already at the core of multiple IDEs, including the cloud-native Eclipse Che IDE, the Arduino IDE, and the online Gitpod IDE for GitHub and GitLab.

"In some ways, we look at the potential impact on the industry of Theia as being absolutely akin to what the Eclipse desktop IDE did almost 20 years ago, in terms of launching a vendor-neutral, open-source platform built for tool developers that is coming from a vendor-neutral, open-source foundation," Mike Milinkovich, executive director of the Eclipse Foundation, told ITPro Today.

Inside the Eclipse Theia IDE

Theia is inherently extensible by design, enabling developers and other tool vendors to build on top of it, according to Milinkovich. With the 1.0 release, Theia also gains support for the Microsoft Visual Studio Code (VS code) extension mode.

Visual Studio Code is an open-source-based IDE from Microsoft that hit its 1.0 milestone in 2016. Although the Eclipse Foundation is positioning Theia as an alternative to Visual Studio Code, it's actually making use of several open-source components that come from Microsoft. Among the VS code components reused in Theia are the Monaco editor and the debug adapter protocol (DAP) project.

"What we're delivering is something that provides even more flexibility for folks who want to build out their own products based on these technologies," Milinkovich said.

While Milinkovich said he finds VS code to be an amazing product, Eclipse Theia is tackling a different market segment: enabling the creation of third-party white label products that are based on an open-source technology stack from a vendor-neutral foundation.

"There are a lot of similarities between the way Theia looks and the way VS code works, and we certainly aspire to being able to offer a development experience that is on par with VS code," he said.

Theia currently has a look that is largely the same as what is available in VS code.

Sven Efftinge, co-founder and CEO of TypeFox and Gitpod, told ITPro Today that he likes the VS code model that provides a very terminal-centric look. He noted that there is also an extension model that allows developers to add more graphics-intensive user interfaces if needed. Efftinge is also one of the project leaders for Eclipse Theia.

While Efftinge likes the way VS code looks for the most part, he said there is still a lot of room for user interface improvements. There is a plan to enable a multi-window mode in Theia where developers can make better use of multiple monitors with the IDE, he said.

"What we plan to do, and have done to some extent, is to make the core workbench a bit better," Efftinge said. "For instance, in Theia developers can easily drag panels anywhere, which is something you cannot easily do in VS code."