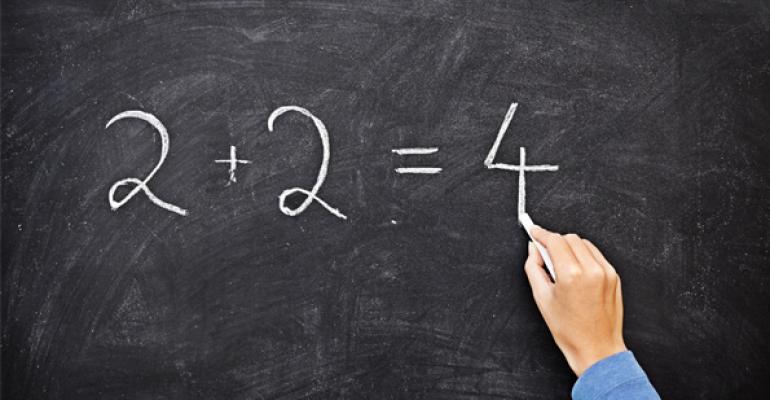 The way computers do arithmetic can be surprisingly different from how we were all taught in school. As a result, programs that do even simple-seeming arithmetic can result in software defects that range from merely embarrassing to extremely expensive. In this article I’ll explain some of the ways that computer arithmetic differs from grade school arithmetic, so that you can avoid the resulting problems. The examples I give will be in C#, but these problems are common to Java, C, C++ and many other common programming languages.

What do you suppose the output of this little C# program is?

If you guessed 4, you’re right. Arithmetic isn’t that difficult in C#! But what about this one? (I’m going to elide the “ceremony” of declaring a class, a main method, and so on, for the remainder of this article.)

In many languages an integer (“int” in C#) can only represent values within a certain range:

Those are the largest and smallest possible integers in this system. (These unusual-seeming numbers are in fact carefully chosen; the total number of possible values is 232 and therefore an integer can be represented in 32 bits of memory.) What if we try to go outside of those bounds?

Why do we have this crazy system? Because first, the vast majority of integer calculations carried out in real programs never have results that are anywhere even close to the maximum and minimum values, and second, because this kind of arithmetic can be made extraordinarily fast. These oddities are the price you pay for achieving billions of computations per second on commodity hardware.

In C# the “checked” statement can be used to turn wrap-arounds into exceptions, but doing so makes arithmetic slower.

Here’s an error I see all the time. Can you predict what this prints? Can you spot the defect?

Integer division results in an integer. So what is 70 / 100? Clearly it cannot be 0.7, because that’s not an integer. When integer division is not exact in C# it always rounds towards zero, not to the nearest integer, so the first calculation of 70 / 100 results in 0, which is then multiplied by the original value. You might think that the code should read:

But that then becomes problematic when the numbers get larger:

Does this solve the problem? No! We get the same “wrong” answers as before. Why?

Finally the results are correct.

What if you need to do integer arithmetic on numbers that do not fit into a long? Many languages now support arbitrary-precision integer arithmetic, where an integer has as much memory as it needs to represent an arbitrarily large number. In C# you can use the BigInteger type. The price you pay is, of course, more memory and more time, but you get to do mathematics that much more closely resembles grade school arithmetic.

So far we’ve only seen arithmetic on integers. We can also use computers to do arithmetic on fractions as well. In school we learned that there are two standard ways to do arithmetic on fractions. The first is to represent a fraction as a pair of integers, called the numerator and denominator: 2 / 3, for example is a fraction with numerator 2 and denominator 3. The second is decimal notation: 1.234 is in fact just a compact way to write the fraction 1234 / 1000. In any decimal notation with finitely many digits the fraction has a denominator which is a power of ten.

Many programming languages have a low-precision type for representing fractions called “float” and a high-precision type called “double” – so-called because it has twice the precision of a float. The exact differences between floats and doubles are not relevant for the purposes of this article, so for the rest of it we’ll just consider doubles. What should the output of this program be? (Notice that to emphasize that an integer is in fact a fraction we’ll append an unnecessary “.0” to the literal representation of the number in the program.)

If you guessed “9.2” and “True”, you’re right. Apparently fractions work perfectly normally. Not so fast!

To demonstrate we need to use a trick:

“g” is almost exactly but not quite equal to 920.0. Somehow an error has crept in to our calculations. Where?

If you were to write that out as a fraction in its simplest form you would discover that all the factors of five disappear, leaving only factors of two in the denominator. This is the best fraction because any other fraction would either be farther away from the true value of 9.2 or require more memory than would fit into a double.

This then is the value that is actually stored in local variable “f”. It is a value extremely close to, but slightly smaller than 9.2. There is some representation error accumulated. Think about the actual number stored as being “9.2 + error”. Now we multiply that value by 100. We know from regular school arithmetic that “9.2 + error” multiplied by 100 is “920 + 100 x error”; we have made the error one hundred times bigger!

As we saw, when printing out a double the runtime will typically round off numbers that are extremely close to integers. If you use the special version of ToString with the “r” argument, this instructs the runtime to print out a more accurate, less rounded-off version of the number.

What do you think the output of this program fragment is?

A double can only hold so much precision; any operation that produces a result that requires more precision may be rounded off. In this case the initial value of “f” is so large and the value being added each time is so small that the result is rounded off to the original value every time. By contrast with “g” we start at zero and successfully compute the sum, which is then large enough to be added to “d” without being rounded back to the original value of “d”.

The takeaway here is that in floating point arithmetic, unlike integer arithmetic or school arithmetic, the order in which you do addition matters. Always add small quantities together before adding them to large quantities to ensure the most accurate possible result.

These are just a few of the ways in which computer math differs from pencil-and-paper grade school math; there are many others I could mention. By understanding those differences you can avoid causing software defects. Keep an eye out for:

Eric Lippert is a software architect at Coverity, where he designs and implements static analysis software to detect defects in C# code. He is a former member of the C# language design team at Microsoft. Eric writes about programming and language design at www.ericlippert.com, and is a regular contributor to the Ask The Bug Guys series on the Coverity Development Testing blog.