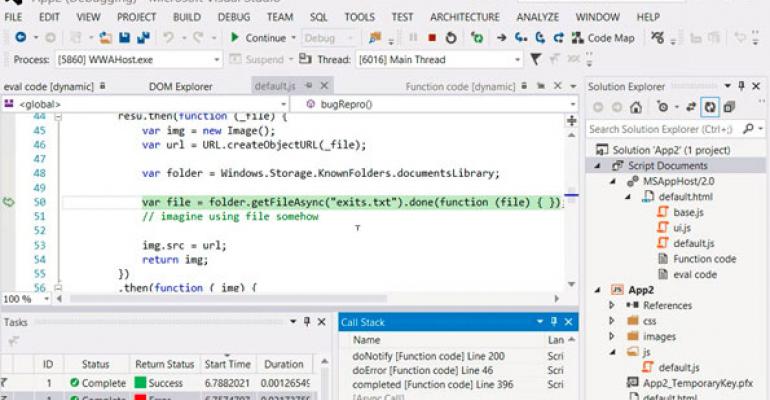 At Microsoft's Build 2013 developer conference in San Francisco this week, the company announced that the Visual Studio 2013 Preview and .NET Framework 4.5.1 are now available for download. The release preview comes after Microsoft's announcement at its TechEd North America conference a few weeks ago where the company announced the next version of the Visual Studio IDE. To learn more about this announcement, see "Visual Studio 2013 Emphasizes Agile Development & DevOps Collaboration."

With this release, Microsoft is providing developers with a taste of what to expect with Visual Studio 2013. In particular, this release includes several different cool features that I imagine many developers will find helpful for their debugging experience. Debugging capabilities include the following:

Diagnostics Enhancements. Because battery life is an important concern to any end user, Microsoft has developed a new Energy Consumption tool that lets developers determine how much power their app will cause the device to consume. In addition, this tool helps developers see what part of their code tends to utilize more CPU time. Furthermore, Visual Studio 2013 includes support for analyzing managed heaps that lets developers run the Debug Managed Memory feature, which then lets the developer explore the .NET objects in the process.