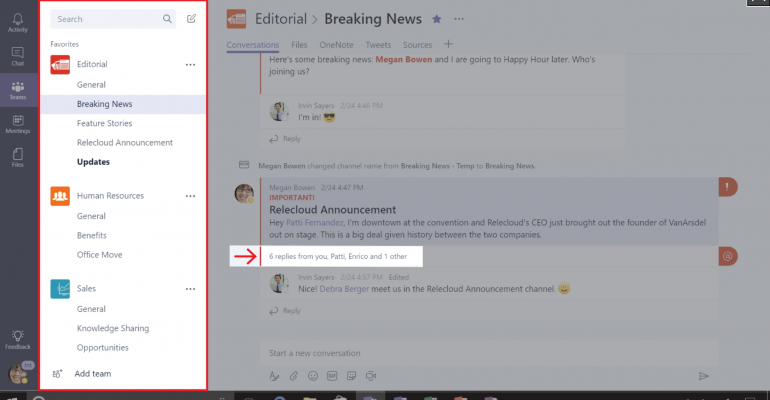 Microsoft Teams: It's a Chat Workspace for Grown-Ups

People whose passions include smacktalk among tech companies -- and really, who among us doesn't enjoy that? -- will recall Slack's ad from last fall welcoming Microsoft to the world of collaborative chat workspaces. And admittedly, Slack does take up a lot of room in the tech press. Recall the Wired story from 2014, "The Most Fascinating Profile You'll Ever Read About a Guy and His Boring Startup," which set the tone for much of the company's coverage.

So why not take a look at how Microsoft Teams -- available today in 181 markets, in 19 different languages -- is similar to, or different from Slack?

We here at Supersite test-drove Teams last fall and I used it last week. We also use Slack here daily. Here's what I've observed in hands-on use of both chat-based workspace tools.

The Slack Audience vs. the Microsoft Teams Audience

Slack is smart -- its freemium model means that giving the service a try doesn't require a significant financial commitment, nor does it present a significant barrier to entry for curious users. Anyone can download the app, set up a Slack, and start poking around to see how to optimize it as a collaborative space. This is how we got started, and now everything from editorial branstorming to collaborative coverage planning to meeting scheduling happens in Slack.

By contrast, Microsoft Teams will only be available to Microsoft's existing commercial customers. There's a lot less opportunity for casual try-outs to turn into fervent users.

The one upside for Microsoft here is that a segment of the likely user audience is already well-versed in Slack as a workplace tool. They'll be the ones who are the earliest users.

Chat Is Chat, But App Integration Is Key

Both Slack and Teams are simple to use: You join a team (or are added to a team) and you just start typing. Teams can have different channels, i.e. focused conversation areas, and there's also one-on-one private chats. For people who need to collaborate on-the-fly and want some documentation of who said what when, either Teams or Slack is great.

What endeared Teams to me was its built-in scheduling capability. Sometimes, "Hey, you around?" chat doesn't work and you do need to schedule a meeting. Thanks to Teams being able to access everyone's Outlook calendars, it can find the best times for a meeting when everyone's available, then suggest those times. As someone who dreads the "When are you available?" conversations, having machine learning do this for me -- thank you, Microsoft Graph -- eliminates a lot of extraneous chitter-chat and keeps schedules running smoothly.

(Note that Meekan will also be available for Teams.)

I'm using calendar access and meeting scheduling as an example to address a larger point: One of the strongest features in both of these systems is the ability to integrate useful tasks or features beyond "I can chat with anyone who's around." Slack's got a whole directory full of apps you can integrate into its environment, from productivity to HR to developer tools. Teams will too -- for example, it's offering a Trello integration for people who wish to manage their project workflow in a collaborative environment.

Where Microsoft Teams Will Thrive

This is a great tool for workplaces filled with people who are already convinced of the utility of an always-open communications tool and have altered their workflow to make the most of it.

"Why not just use Slack instead?" you might ask. First, Teams is integrated into other Microsoft products, from SharePoint to OneDrive, and that integration means less work for an IT department or the end user. Second, Teams is part of Office 365, while Slack would require another line item in the budget. Third, there are a number of features that will make Teams attractive to security-conscious IT pros. Among them: Teams supports two-factor authentication, it supports a slew of professional standards (among them, SOC 1, SOC 2, EU Model Clauses, ISO27001 and HIPAA), and it prohibits outside users.

Slack allows people to invite anyone to join a team -- a feature that seems great right up to the moment when an outside freelancer or friend-of-a-friend casually downloads the company files that have been shared on Slack.

Teams' approach is different: There are open, public teams within an organization, and there are teams that can be tweaked to reflect specific groups within the organization. For example, your company might have an open team called "Holidays" devoted to discussing the days that the company is closed, but only the members of the HR department are permitted to join and read the HR team.

Where Microsoft Teams Has a Huge Advantage

Because Teams is part of Office 365, it's got tie-ins to lots of other Microsoft apps. For example, Skype is fully integrated, so users can quickly launch a video call to other Teams users as the need arises -- and they can still navigate among other conversations as they do. You can easily open Excel, PowerPoint and Word files within the Teams workspace and do collaborative reviews and editing. There's no futzing with add-ons if you don't want to -- Microsoft's already set up a user experience where everything from a OneDrive file repository to running conversations are in one workspace.

And true to the Microsoft aim of making Office 365 an all-encompassing workspace, Teams has introduced tabs to some views. Users can "pin" apps and files in either the channels they belong to, or the private chats they conduct -- this easy access to often-references resources is another way to make the app experience sticky.


So Which Is Better -- Teams or Slack?

Trick question -- they're both great, provided you're the kind of person who's comfortable keeping a chat-based workspace open all day, then dipping in and out of conversations as you're pinged. Slack's strengths are its customizability, its freemium model, and its openness: many Slack users I know have eight to twelve separate Slacks in the app, only half of which are actually work related.

By contrast, Teams is here to work. Sure, there are fun emojis and the potential to do organization-wide channels that are more about company culture than strict task-oriented communication. But Teams is clearly meant as the chat workspace option for companies that want to take advantage of the strengths such an app environment offers, but can do so only after nailing down all compliance and security concerns. And, as of right now, Teams supports far more languages than Slack does, so it's a stronger candidate for multinational businesses.

Ultimately, choosing one of these apps over the other will come down whether or not your workplace is embracing the encompassing nature of Office 365. If they are -- let us know how you like Teams