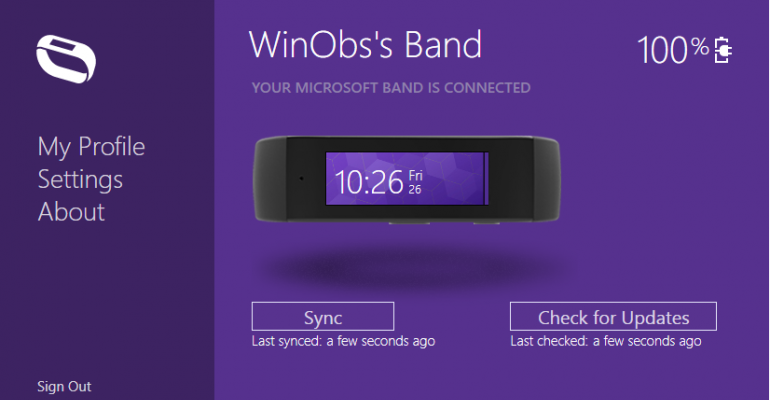 The Potential of the Microsoft Band

You may have read last week about the return process I went through to replace my Band which had a defective clasp on it.

That quick return process meant I did not have to be without the Band at all because I received the replacement before I had to send back the device which had broken.

With my Band on my wrist I was finally able to do something with it I have been wanting to do since I got it – use it to pay for Starbucks.

See one of the apps that the Band has alongside of the exercise tracking and workout apps is a Starbucks app that lets you use your Starbucks card to pay for purchases at any Starbucks.  You just tap on the Starbucks tile and a barcode is shown on screen that can be scanned at the register to pay the barista for your purchase.

It does however, seem counter-productive to get a sweet sugary drink and pay for it using a wearable that helps you track your exercise.

Anyway - you still charge-up your Starbucks card through their website to keep credit on it so it is always ready to be used whenever you need it. The convenience behind just being able to flash your wrist and the Band screen at the scanner and walk away with your beverage is nice and let’s be honest it is a great geeky thing to do as well.

So with understanding how the Starbucks app works with Microsoft Band I wanted to explore some other potential areas that the Band could come in handy.

The first and most logical area is for customer loyalty programs. Most of these programs issue cards or keychain tags to customers that have bar codes on them so that they can be presented and scanned at any point of sale to give the customer credit for the purchase they are making.  Since we know barcodes can be easily presented on the Band this is a no brainer.

This option could be implemented with separate apps for each card but an even better use of space would be to have a single app that could contain multiple loyalty cards.  You just open the single tile on the Band and then select the program card you want to have scanned.  Setup can be done in the Microsoft Health app or, even better, in the Microsoft Wallet that comes with Windows Phone.

This next idea Is not possible yet but the ultimate ability to use Band to make electronic payments seems to be a logical step.

I recently started using the Softcard app on my AT&T Nokia Lumia 1520 and it has been very handy.  I did have to go to an AT&T store to get a secure SIM to use the service but that cost me nothing but 10 minutes to visit the store.

Once I added a payment method all I have to do is open the app, enter my PIN and then tap the phone against the payment terminal to pay for my purchase.

In fact, this method of payment has proven to be a good financial choice because I recently received $30 in Amazon gift cards from Softcard just for using the app to make payments in the normal course of my shopping. I am always a fan of free money!

Now currently the Band does not have NFC so short of using just a barcode to make payment, which would be very insecure to say the least, this is not a viable option right now. This might be a feature that could be implemented on a future version of the hardware tied in with NFC and the ability to enter a PIN code on the Band.  With the sensors on this or a future version of the Band another option might be to tie in a biometric signature of some type to validate the wearer and then authorize the Band to use one of the payment methods. The ultimate PIN in my opinion and likely one of the most secure.

Security of your payment method would be the most important element off all of this and likely a stumbling block to implement it and make it mainstream.

I don’t think anyone would object to someone else using their loyalty card to earn those credits and points but using a payment method is an entirely different story.

So what ideas do you have for expanding the capabilities of Band?