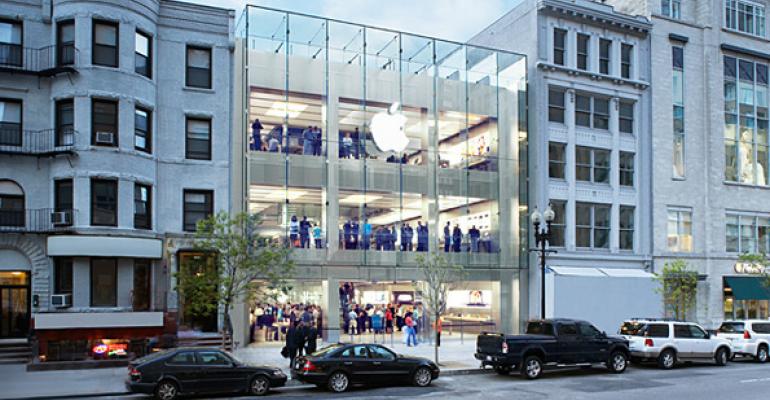 Apple Profits Drop for First Time in Nearly a Decade

Apple sells more iPads, but those iPads are much cheaper than previous iPads

Apple’s normally triumphant quarterly financial results were undercut by a rare lapse: This was the first time in nearly a decade that the consumer electronic giant’s profits fell year-over-year. But despite not shipping a truly new or innovative product in years, Apple is still on a roll, and it promises to surprise customers with “new exciting products” in the coming year.

Related: "Apple Results: iPhone, iPad Up, but Macs, iPods Down"

The firm announced that it sold 37.4 million iPhones, though that number consists largely of older iPhone 4 and 4S models as well as the more recent and evolutionary iPhone 5. Sales of iPhone overall are up just slightly from a year earlier, reflecting Android’s increasing lead in the smart phone market. And the average selling price is down, sequentially, by about $28, reflecting the heavier mix of older devices.

Sales of iPad hit 19.5 million units, up significantly from the 11.8 million units Apple sold a year ago. This is due almost entirely to the popularity of the cheaper and smaller iPad mini, which delivers lower margins than the bigger iPads and explains Apple’s profits shortfall. Following the market into cheaper 7-inch tablets—Amazon, Google and other Android device makers were there first—Apple has been forced to pursue market share over profits in order to prevent Android from dominating this market as well.

Mac sales fell just slightly to 3.9 million units, reflecting the current PC industry sales downturn as expected. And iPod sales, on a long slow slide downward, hit 5.6 million units, down from 7.7 million units in the same quarter a year ago.

To shore up nervous investors—the firm’s stock price has dropped from above $700 to the $400 range in the past six months, shedding $290 billion in shareholder value—Apple will finally open up its extensive cash hoard and deliver $100 billion in cash to shareholders by the end of calendar year 2015. (The firm currently has an incredible $144 billion in cash and cash-like assets.) Apple’s board also approved a 15 percent increase in the company’s quarterly dividend.

Neither move would have been allowed under the leadership of former Apple CEO Steve Jobs, but times are certainly changing. And they take the pressure off current CEO Tim Cook, who’s been the subject of ouster rumors amidst the company’s stock price freefall.

Additionally, Apple teased about “new exciting products” that it will deliver in the coming year, though it suggested that these products—which will certainly include more incremental upgrades to the iPhone and iPad in addition to truly new products—would arrive in fall 2013 and not this summer as previously expected. Amazingly, Mr. Cook backed off from Apple’s previous assertions about a “post-PC world,” noting that the popularity of low-cost iPad mini tablets might jumpstart new sales of companion Mac PCs. But it’s unclear what new product category—TVs? Watches? Really?—could possibly return Apple to its days of heady growth. Apple, now a huge company with mature product lines, may simply have to settle on being just enormously successful.