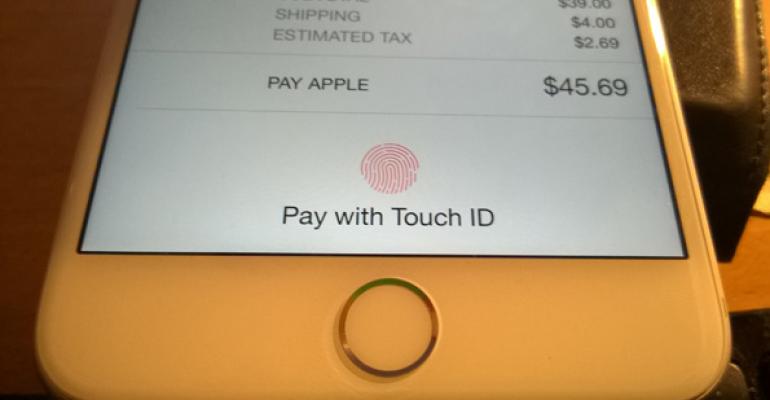 With the release of iOS 8.1 for iPhone and iPad today, Apple has also unleashed Apple Pay, its new e-wallet and electronic payment platform. Here's a quick peek at the future of payments and, perhaps, the end of the physical wallet.

The new iOS 8.1 release isn't just about Apple Pay—it also adds new Photos, Messages, AirDrop, and other features, plus all kinds of fixes—but come on, that's all anyone cares about. Here's what it's like, on day one.

First, you can now add credit and debit cards to Passbook, the e-wallet that in iOS 8.1 is finally living up to its name. Previously, it was good only for boarding passes, movie tickets, retail coupons, and loyalty cards, which really limited its usefulness. I used it primarily for JetBlue boarding passes.

To do so, you can try to scan the card using your iPhone's camera. If that doesn't work for some reason—some of my cards are pretty beat up—you can manually enter some or all of the information as well.

When you do, you'll be told whether the card issuer supports Apple Pay. If it doesn't, you can't use it, as I discovered with my work AMEX. And my bank's debit card. It wasn't until I got to a rarely-used Chase credit card that I was able to get it going. I was finally able to get it working with two Chase cards (one Visa, one MasterCard) and my Costco AMEX card.

Many issuers require an additional verification step, such as a phone call, a text message, an email or even an app. I used a text message for two of the cards and email for the other.

Once you're done entering credit cards into Passbook, they'll appear in there alongside your previously configured loyalty cards, boarding passes and whatever else you had. With my AMEX card, which we actually use, there was a note about the most recent transaction (a fairly hefty bill for a family trip next year).

Tap the Info button ("i") and you can see all of your recent activity and a way to configure card notifications. That alone is actually pretty impressive, and I'll be monitoring this now to see how card use is communicated through the phone.

A curiously expensive month for the AMEX

But of course we have this capability because we want to buy stuff, right? And on that note, Apple Pay supports basically two types of electronic payments, online and in-person.

Online is of course easier to test from the comfort of one's home, and you can find an app that supports Apple Pay—like Apple Store, of course, but also many others including Disney Store, Groupon, Panera Bread, Staples, Target and more—and check it out easily enough. Online options also work on older devices, while the in-person experience requires an NFC-based iPhone 6 or 6 Plus. So I tried that today. (I'll head out to a local McDonalds and given the in-person payment a go later.)

To test Apple Pay on the go, so to speak, I used the Apple Store app. It was pretty straightforward: Just choose Apple Pay as the payment type, choose the card you wish to use, and then hold your thumb on the iPhone's Touch ID. Worked like a charm. Shocker, I know.