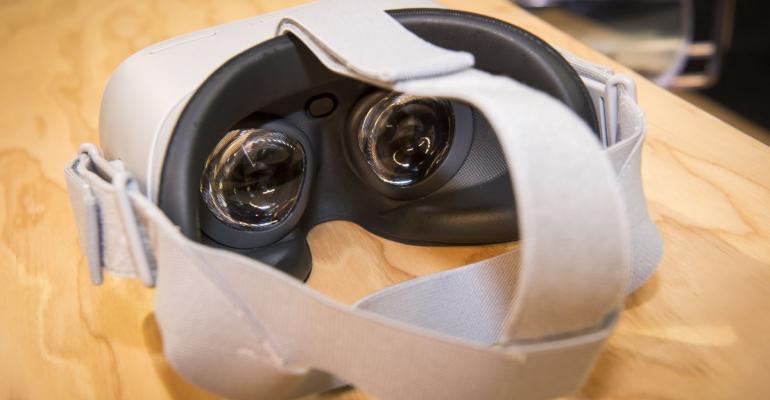 Qualcomm Inc. plans to unveil a dedicated chip to power standalone virtual-reality and augmented-reality headsets as it seeks to break into new businesses beyond smartphones, according to people familiar with the matter.

(Bloomberg) -- Qualcomm Inc. plans to unveil a dedicated chip to power standalone virtual-reality and augmented-reality headsets as it seeks to break into new businesses beyond smartphones, according to people familiar with the matter.

The announcement will happen as early as next week at the Augmented World Expo in Santa Clara, California, the people said. They asked not to be identified because the plans aren’t yet public. The chip, to be called Snapdragon XR1, will be a system-on-a-chip with a main processing unit, a graphics processor, security functions and components to handle artificial intelligence tasks. The chip will also tackle voice control and head-tracking interaction with headsets.

The product is designed to make it easier for hardware manufacturers to build headsets that are cheap, powerful and energy-efficient. In recent months, the virtual-reality headset industry has moved toward standalone devices rather than expensive models that must be tethered to high-powered personal computers. Facebook Inc. launched the Oculus Go with a Qualcomm smartphone chip, while Google has also partnered on standalone headsets that use a Qualcomm phone processor.

So far, such headsets haven’t offered smartphone-like battery life, but a chipset optimized specifically for these wearables could improve that functionality over time. While Qualcomm will be the first major manufacturer to launch a chip specific to headsets, others are at work on similar technologies. Apple Inc. is developing its own chip for augmented-reality glasses that it plans to sell as early as 2020, Bloomberg News reported last year. Intel Corp. and Nvidia Corp. have shown interest in this field, too.

Qualcomm declined to comment. The largest maker of mobile-phone chips is seeking new sources of revenue as growth in smartphones dries up and competition intensifies. The San Diego-based chipmaker will team up with a number of existing headset makers that plan to include the chip, including HTC Corp. for its Vive headset and Vuzix Corp., which makes AR headsets, the people familiar said.