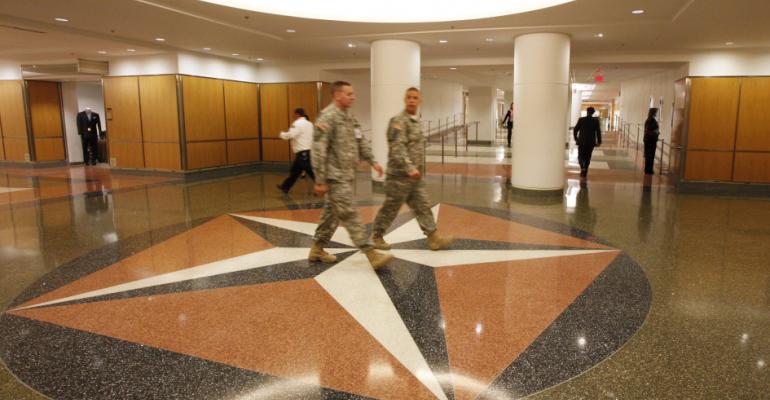 Microsoft is sending representatives to a series of meetings with Pentagon officials Wednesday to discuss how companies can contribute to the military’s work on artificial intelligence. It is the only Big Tech company set to attend the event.

(Bloomberg) -- Microsoft Corp. is sending representatives to a series of meetings with Pentagon officials Wednesday to discuss how companies can contribute to the military’s work on artificial intelligence, according to a list of participants reviewed by Bloomberg. Microsoft is the only Big Tech company set to attend the event, which is likely to draw objections from employees and protesters who have broad concerns about the use of AI for military purposes.

About 140 companies and organizations are on the list of attendees, which includes Boeing Co., International Business Machines Corp. and Lockheed Martin Corp. Anduril Industries Inc., a new startup from former Facebook Inc. executive Palmer Luckey, will also be there. The defense contractor began working this year on Project Maven, a technology unit of the Pentagon whose official name is the Algorithmic Warfare Cross-Functional Team.

For the last two years, Maven has been at the center of a contentious public debate over the technology industry’s willingness to help build military technology. The project uses computer vision software to automatically analyze footage gathered by U.S. military drones. Google, an early participant in Maven, said last summer it would stop working on the project, following protests from employees who said the work strayed too closely to autonomous weaponry. Employees at Clarifai, a small computer vision startup, also objected to Maven, although that company continued to work on the project. It is on the list of attendees for this week’s meetings, which are co-hosted by Maven officials.

Wednesday’s event is billed as an “AI Industry Day,” and the stated goal is to develop AI technology to assist soldiers in the field. The government said it is particularly interested in facial recognition, natural language processing, social media data and drone footage.

Microsoft has made significant inroads with its military business over the last year. It won a contract a year ago worth as much as $480 million to build combat-ready versions of its HoloLens augmented reality headsets. Last month, it also won a $10 billion contract called Joint Enterprise Defense Infrastructure, or JEDI, to build cloud computing infrastructure for the Defense Department.

Both contracts inspired criticism from Microsoft employees who said they hadn’t signed up to build weaponry. The company’s executives have consistently said they would not step back from working with the U.S. military. In a meeting with employees the week after the company won the JEDI contract, Microsoft Chief Executive Officer Satya Nadella said he respected dissenting opinions but that the company had always been unambiguous about its military work, according to a person who attended and asked not to be identified discussing a private event. A Microsoft spokesman declined to comment.

The Defense Department has put increasing focus on AI in recent years. It sees the technology as key to geopolitical competition with China. But building it has come with challenges. U.S. officials have spoken openly about tensions in the military’s relationship with tech companies.

“Some employees in the tech industry see no compelling reason to work with the Department of Defense,” Lieutenant General Jack Shanahan, the head of the Pentagon’s Joint Artificial Intelligence Center, said at an event last week. Their reluctance, he said, often came from the government’s inability to adapt to the pace of the private sector: “We don’t make it easy for them.”