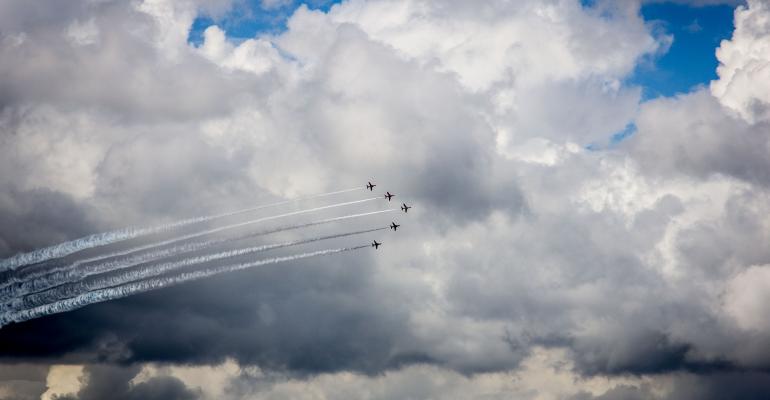 The DoD was slow to use the cloud in the past, but it is now seeking innovative ways to bolster defense systems using AI, AR, Big Data and more.

After cautiously approaching cloud computing in recent years due to serious concerns about security, the U.S. Department of Defense (DoD) is now increasing its cloud spending and is planning to incorporate artificial intelligence, big data, machine learning and augmented reality into the nation's defense systems.

According to the report, "Department of Defense: Artificial Intelligence, Autonomous Systems and the Third Offset" – which was compiled by big data and analytics research firm Govini – the cloud is central to processing the huge amounts of data required by artificial intelligence, big data, machine learning, augmented reality and other important technologies that are critical to building the weapons and other defense systems of tomorrow.

Overall, the DoD's spending on AI, big data and the cloud has grown 32.4 percent in the past five years, from $5.6 billion in fiscal year 2012 to fiscal year 2017 to $7.4 billion in fiscal year 2017. Thirty-three percent of that $7.4 billion spending went to AI, while big data accounted for 47.9 percent and cloud spending accounted for 19.1 percent. Spending also increased in the related fields of natural language processing, deep learning, machine learning, quantum computing, computer vision, and virtual reality. One caveat for the spending data is that it only reflects spending only on unclassified defense contracts, "so this report tells only part of the story," the document states. "Nevertheless, spending on unclassified contracts provides a clear indicator for the overall seriousness" of the DoD's efforts.

Because cloud computing is the most efficient way to facilitate access to Big Data for use in future DoD projects and research, spending on the cloud is expected to rise significantly in the future. In September 2017, Deputy Secretary of Defense Jack Shanahan signed a memo directing the department to accelerate its enterprise cloud spending and services to accelerate its cloud deployments to expand its needed research, according to the report.

"The cloud is very much a critical component in being able to fully unlock the potential of AI," Matt Hummer, the director of analytics for Govini, told ITPro. "And the DoD has realized that without using cloud, it can never really get the potential of all the data it can collect."

That means the military needs to have more trust in the security of the cloud.

In the past, such DoD data was siloed and not available to other systems in development, which complicated the development of projects, said Hummer. Now DoD officials "realize it can't be done that way going forward."

To accomplish this, there will be a continuing convergence within the DoD of big data, the cloud and AI, Hummer says. That will allow data and research to more easily be shared across DoD departments so they can make better use of big data tools across the cloud, while leveraging other technologies as well.

"The key to AI is having clean, high-fidelity and large amounts of data," said Hummer. "For AI systems to be trained to make autonomous or automatic decisions, they need to use very large data sets that are clean" and without errors or defects.

The DoD is now making those investments and is taking a more cloud-focused approach, he said. "Big data is happening within the DoD. And it will happen faster when there are more cloud instances."

One area where AR and VR are being used now is in military pilot training and simulations, where pilots can train in military jets before they even get into the air, which drives down costs and improves training, said Hummer.

At the same time, the data sets created by those AR and VR training missions are being built and saved so they can be used in future systems and training. That data will then be available for use in programming autonomous platforms in the future for additional training, he said. "DARPA (Defense Advanced Research Projects Agency) is investing in a lot of that technology to bring it up to speed."

In a forward to the report, former Defense Secretary Robert O. Work wrote that "rapid advances in AI —and the vastly improved autonomous systems and operations they will enable—are pointing towards new and more novel warfighting applications involving human-machine collaboration and combat teaming. These new applications will be the primary drivers of an emerging military-technical revolution."

Work, who served as the defense secretary from 2014 to 2017 under President Barack Obama, wrote that "the U.S. military can either lead the coming revolution, or fall victim to it."