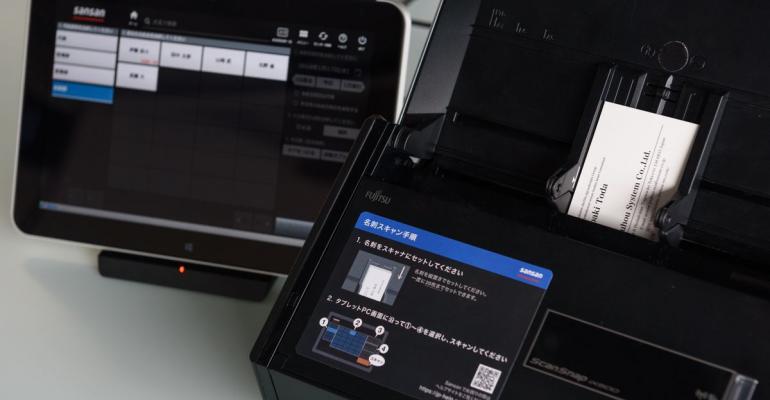 By tracking relationships that are forged every time a card changes hands, the cloud-based software can generate sales leads, or suggest go-betweens for any business deals.

(Bloomberg) --Even in the age of LinkedIn profiles and digital addresses, the business card endures.

In almost every place on earth, people exchange contact information using printed rectangles of paper (except, perhaps, in Silicon Valley and increasingly in China). They can get lost, and most folks don’t take the extra step of transferring names and numbers to a digital contacts list.

Sansan Inc. is seeking to change all that. Once business cards are scanned, the Tokyo-based startup analyzes them so that people can discover who within a company knows whom. By tracking relationships that are forged every time a card changes hands, the cloud-based software can generate sales leads, or suggest go-betweens for any business deals.

“It’s said that there are 10 billion business cards in the world, and that a billion are exchanged every year in Japan,” said Chief Executive Officer Chikahiro Terada, who co-founded Sansan in 2007. “Each business card represents an encounter. There’s so much potential in each one.”

While software is used to scan each card, a human being always checks to make sure the information is accurate. The data gleaned from stacks of cards is often detailed enough to re-create another company’s organizational chart. The database can also track job changes and also delivers push notifications to let people know when a colleague finds a new contact. For sales departments and dealmakers, especially at large companies, it’s essentially an in-house social network of business contacts.

That level of accuracy doesn’t come cheap. Corporate contracts start at 50,000 yen ($451) a month, depending on the number of users. On top of that, new customers pay an initial fee equivalent to a year’s service, to cover the initial scan of a company’s existing repository of business cards. Users can also upload cards with their smartphones, or via a dedicated scanner. All of the cloud-based information is accessible from an app. More than 6,000 companies have signed up, including Lenovo Group Ltd., Merck & Co. and Seven & i Holdings Co.

“It’s an ingrained part of our business now,” Terada said. During the interview, a search of Sansan’s database revealed that they had 15 contacts at Bloomberg, based on the startup’s business-card history. “Generating business based on a meeting by a senior manager, that’s just a normal occurrence.”

While this might seem similar to what LinkedIn does, Terada says that it’s different in that there’s much more transparency within a single company’s network of contacts. For public relationships, Sansan offers a version of its services called ‘Eight,’ which has about 2 million users. Aimed at individuals rather than companies, Eight is a more direct competitor to LinkedIn, or Wantedly Inc., a Japan-based professional social network.

“One potential hurdle is that there may be people within a company who don’t want to share their contact information,” said Takehiro Fukuda, an author of three books on the design and culture of business cards. “But if you are looking to boost your productivity, then Sansan has an impressive way of making that a reality.”

Fukuda, who does consulting work and holds seminars on meishi (business card in Japanese), also pointed out that Sansan makes it easier to maintain relationships, because people in Japan and other Asian countries tend to exchange cards even before starting a conversation. In contrast, those in the U.S. and Europe are more likely to use cards to exchange contact information after getting to know someone.

Backed by investors including Salesforce.com Inc., Goldman Sachs Group Inc. and Toyota Motor Corp., Sansan has had four rounds of funding, raising about $93 million to date. The company regularly seeks financing on a one-to-two year cycle, and is open to an initial public offering if that’s the best way to obtain funds, Terada said.

“We have laid the groundwork for an IPO in the past few years, and we are ready in case that’s an option,” Terada said. “But I don’t want to make that the goal.”

Terada accepts there will probably come a day when business cards become a relic of history. In China, many people just exchange WeChat contacts, and in Silicon Valley many people just connect via any mutually useful messenger service, social network or email address.

“For Sansan, the disappearance of business cards can be both an omen and an opportunity,” Terada said. “The one thing everyone understands is that business cards will die within a company if they remain on paper.”