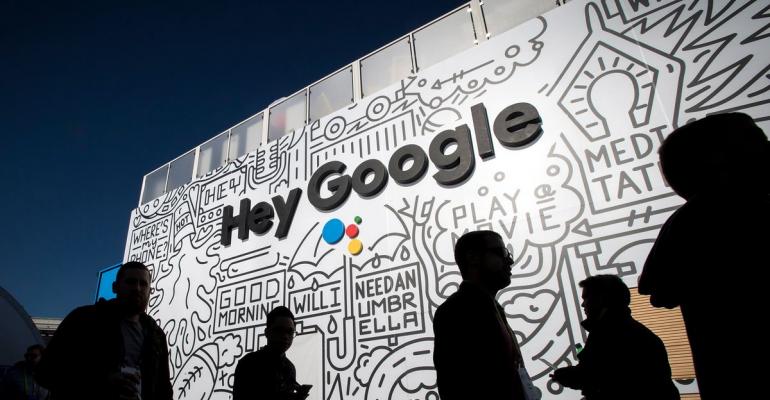 Google introduced new products and technology upgrades at its annual developer conference that showed the internet giant lagging behind Apple Inc. and Amazon.com Inc. in some areas while driving home its superiority in artificial intelligence.

(Bloomberg) --Google introduced new products and technology upgrades at its annual developer conference on Tuesday that showed the internet giant lagging behind Apple Inc. and Amazon.com Inc. in some areas while driving home its superiority in artificial intelligence.

The feature that got the most attention on the first day of the I/O developer show was called Duplex. It’s part of the Google Assistant, a voice-controlled system that answers questions and performs an increasing array of tasks on command. It competes with Amazon’s Alexa and Apple’s Siri. A demonstration on stage showed Google’s Assistant calling small businesses to book appointments. A Google executive asked the system to make a restaurant reservation and when a human there picked up the phone, the software discussed different times, the number of seats and other details with the unsuspecting employee. Duplex is launching as an experiment soon, the company said. Google Assistant also is getting some new voices, including musician John Legend’s.

Gmail Will Write Your Emails

Duplex relies on AI, a type of software that learns automatically from data, rather than having to be hand-coded. Google has been developing machine learning, computer vision, natural language understanding and other forms of AI for at least a decade and is considered a leader in the field. AI powers many of the other new products and features Google showed off on Tuesday, including Smart Compose for Gmail. This technology predicts the next words or phrases as people type an email. It takes Gmail a step further beyond Smart Replies, a feature from a few years ago which suggests appropriate responses to emails.

Google introduced version 3.0 of its Tensor Processor Unit, a chipset designed in-house for handling all these data-heavy AI tasks. The new version is eight times more powerful than last year’s and it is water-cooled rather than air-cooled. Older TPUs are available for outside companies to rent through Google’s cloud-computing business. But for now, only Google gets to use the latest version.

Maps Gets an AR Upgrade

The company introduced a Visual Positioning System, a new way for people to find their way around with Maps using their phone cameras and Google’s augmented-reality and computer-vision technology. The feature tackles a common problem when using Google Maps for walking directions: It’s not always clear which way to walk initially. Now users will be able to raise their phones and see an image of the street with a large arrow pointing the correct way. The Maps application also got some functionality similar to Apple Maps and Yelp to point users toward suggested places.

Google announced big upgrades to its Photos app, including the ability for AI algorithms to suggest who to share shots with based on who is in the picture. The system will also make editing suggestions and turn black and white photos to color.

Google praised the importance of journalism and announced a new Google News app for Android devices, iPhones, and the web. It comes with a built-in subscriptions tool making it easier for readers to pay for digital magazines and newspapers. It also has a tab for suggested news and can play video. Sound familiar? It looks like the Google version of the Apple News service launched in 2015. Apple News is getting its own upgrade in the next year with a Netflix-style subscription service, Bloomberg News has reported.

Google said it will begin encouraging children to say “please” to the Google Assistant, to encourage better manners. Amazon announced similar functionality for Alexa a few weeks ago.

Google also wants you to use your phone less. Many tech companies are looking to free people from their devices, but Google is one of the first to show off tools. The company announced a new Dashboard tool for Android phones that lets users monitor how long they’re watching YouTube videos or using other apps. Apple plans to show off similar functions when it announces a new version of its iOS mobile operating system next month, Bloomberg News has reported.

The latest version of Google’s mobile software, called Android P, was announced a few months ago, but Google held back a big change for Tuesday: A revamped interface that looks like the iPhone X’s new gesture-based system. It eschews a software navigation bar at the bottom of the display for more fluid interactions that take users between apps and back to the home screen.