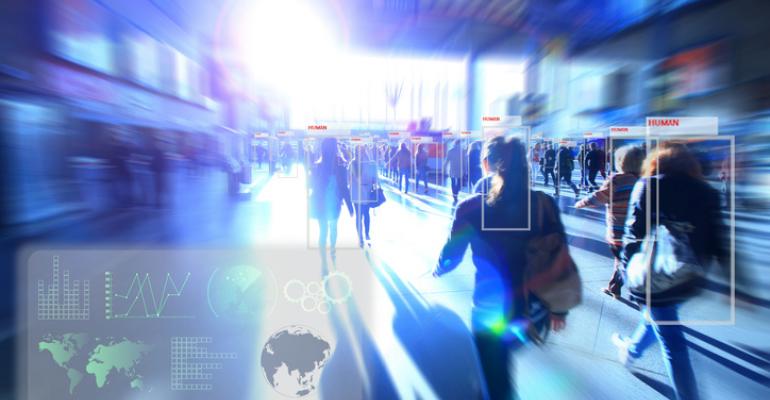 Tech companies are increasingly competing with one another, as well as banks and hedge funds, to hire experts in AI techniques like neural networking.

(Bloomberg) -- Actors in robot costumes stood in the lobby of the Westin hotel in Long Beach, California on Sunday night, “Intel Inside” stickers displayed on their foam torsos. People posed for selfies before heading to an upstairs ballroom, decorated with neon purple lighting and plush white leather furniture, for an event that was more party than technology panel discussion.

This was one of many attempts by Intel Corp. and other giant corporations to curry favor with artificial-intelligence researchers attending one of the world’s biggest AI conferences, turning what was once an academic event into a recruiting frenzy more akin to the National Football League’s draft day.

Tech companies are increasingly competing with one another, as well as banks and hedge funds, to hire experts in AI techniques like neural networking, a kind of machine learning loosely based on how the human brain works. These are the skills behind recent advances in computers’ ability to identify objects in images, translate languages, drive cars and spot financial fraud. More changes are in store for many industries and conferences like this week’s one on Neural Information Processing Systems, aka NIPS, are where companies can go to hire the talent they need to embrace their AI future.

NIPS began 30 years ago, and as recently as 2013, fewer than 2,000 people attended. This year, it attracted more than 7,500 – almost 40 percent over last year. Conference tickets sold out in 12 days compared with six weeks last year. And yet demand continues to far exceed supply, with “machine learning” job postings on recruiting site Monster.com more than doubling in the past year.

“With talent this scarce, it can be hard to find people,” said Chris Rice, the head of global talent acquisition for Intel’s AI product group. “You’ve got to reach out to people at events like this. This is the biggest event for AI for the year, so you have to be here.”That scarcity has driven up salaries. Newly minted Ph.D.s earn north of $300,000 and top-ranked senior academics command multimillion-dollar, multiyear contracts. Salaries at DeepMind, an AI company owned by Alphabet Inc., averaged $345,000 in 2016, according to U.K. regulatory filings. That soaring compensation has changed NIPS, which once brought together a few hundred academics in a small hotel conference space, with little corporate sponsorship and no press attention. Bemoaned by some, and applauded by others, the transformation follows a similar path as other areas of technology, like the internet and bitcoin, that began as wonky technical fields only to become lucrative battlegrounds for billionaires and corporations.

Startups and less-well known AI consulting firms are present too along with a growing contingent of financial firms, including banks like JPMorgan Chase & Co. and hedge fund firms like Man Group Plc’s AHL division. (Bloomberg LP, parent of Bloomberg News, sponsors the conference and uses it to recruit machine-learning experts, too.)

Citadel, the $27 billion hedge fund firm founded by Kenneth Griffin, this year put on a series of lunches at the Hyatt Regency for interested job candidates.

Xavier Amatriain, co-founder of AI startup Curai and a Netflix alum, said Amazon has tried an unusual tactic to recruit him at NIPS. “Amazon knows that I’m a runner so invited me to their morning running group,” he said. “It’s a way of getting connected, so they are going to try to hire you while you’re running.”Much of the real action takes place in the evening at private parties corporations host at swank clubs and restaurants for a select list of invitees they are particularly keen on wooing. Conference organizers have had to plead with corporate sponsors not to hold events that start before 9 p.m., for fear of drawing too many attendees away from the official business each evening: academic “poster talks” in which researchers discuss their papers for hours in front of a poster summarizing their work.

Other companies have taken a lower-key, soft-sell approach. “We find having a quiet conversation about goals and philosophy is always preferable to a crowded booth or hectic party,” said Dileep George, co-founder of San Francisco-based AI company Vicarious.

Corporate recruiting at NIPS and elsewhere worries some academic computer scientists. Oren Etzioni, chief executive officer of the Allen Institute for Artificial Intelligence in Seattle, is among those who fear a brain drain. “It’s a question for the whole ecosystem – who is going to train the next generation?” he said.

Alex Smola, director of machine learning at Amazon Web Services, Amazon’s cloud computing business, said corporate AI hiring is having the opposite impact -- rather than brain drain, it's drawing more smart people into the field of study. You can see that at NIPS this year, he said.

When Smola finished a degree in the 1990s, he threw a graduation party at NIPS and invited about half the conference attendees. There were 150 to 200 people and he knew everyone.