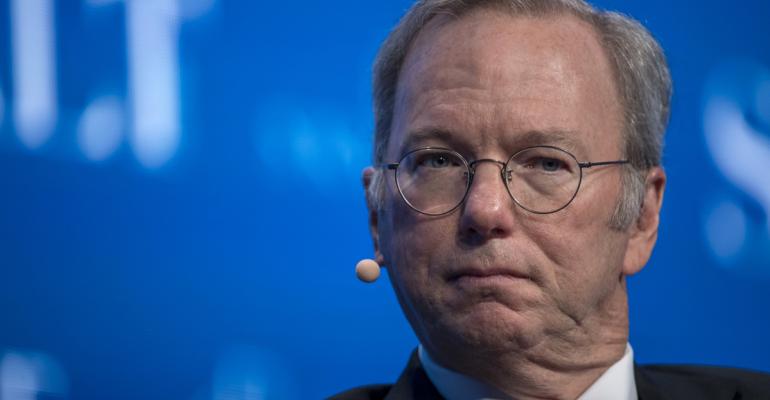 At a Tuesday hearing of the House Armed Services Committee, Google’s former chief executive officer gave a strong endorsement of the Pentagon’s proposal for a new AI center and its collaboration with technology companies.

At a Tuesday hearing of the House Armed Services Committee, Schmidt gave a strong endorsement of the Pentagon’s proposal for a new AI center and its collaboration with technology companies.

"The nature of AI is a long-term technology that will be useful for defensive and perhaps offensive purposes as well," said Schmidt, who also chairs the Defense Department’s Innovation Board. Any efforts to "make it easier" for the Pentagon to work with private industry would be welcome, he added.

The veteran Google executive stepped down from his role as Alphabet chairman in December. He remains on the company’s board. Google’s recent deals with the government for cloud-computing services have prompted a furious debate inside the company.

One Pentagon program, Project Maven, will deploy Google’s AI cloud software to analyze drone footage. Google has said the work is not for offensive purposes. More than 3,000 employees wrote to CEO Sundar Pichai earlier this month objecting to the contract. They argued that Google "should not be in the business of war” and asked for a policy stating the the company will not “ever build warfare technology.”

During the hearing, Schmidt declined to directly address the Google protests, but he said the tech industry would arrive at a set of "principles" about the use of automated technology for military purposes.

"We benefit from fundamental research that the military funds," Schmidt said. "If it’s a question of a military program, then it has to be done on a cost-benefit basis by that company. To the degree that the government can make it easier for that company to work with the government, that’s a net benefit."

He noted that he was speaking in a personal capacity. A Google spokesman declined to comment.