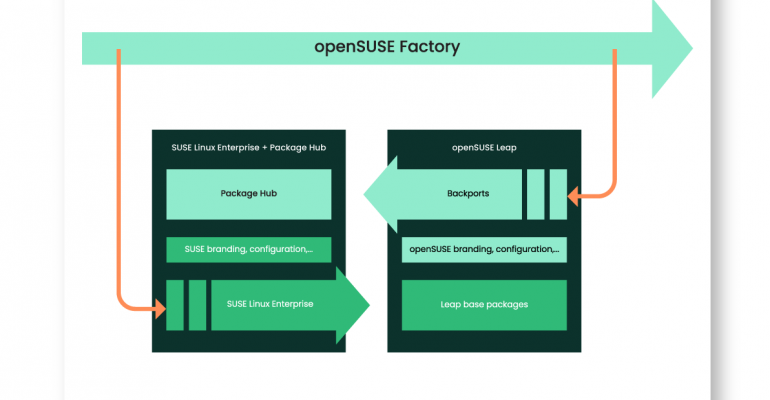 SUSE Linux Enterprise 15 SP3 opens the door for DevOps teams to use openSUSE Leap for non-mission-critical workloads and save the SLE licenses for servers running in production.

With this SUSE Linux Enterprise 15 SP3 release, SLE and the openSUSE Leap community distribution become more like twins instead of siblings.

Until now, Leap has been based on SLE, but was more of an upstream version. With this release, the two distributions actually share the same binary code, with the only difference being that some copyright notices and branding has been removed from Leap. This makes the community-focused Leap a free drop-in replacement for SLE, similar to the way that CentOS was a drop-in replacement for Red Hat Enterprise Linux – except CentOS never shared the same binary and was a completely separate distribution.

Because of this closer kinship, going forward, new releases of both SLE and Leap will happen on the same day instead of on independent schedules.

A note on naming: SUSE uses a "service pack"-based versioning system similar to Windows, meaning this release would correspond to version 15.3 under conventional Linux naming. SLE forms the base for all of SUSE's commercial products, including SUSE Enterprise Linux Server and SUSE Enterprise Linux Desktop.

"SUSE Linux Enterprise has a common code base that runs across so many of your architectures, containers and edge devices – providing the same IT experience, security, and stability across that mixed infrastructure, so you can streamline IT skill sets and systems management and simplify support and services," Jeff Reser, SUSE's director of product and solution marketing, said in a blog announcing the release.

This compatibility opens the door for DevOps teams to use Leap for non-mission-critical workloads, and only buy SLE licenses for servers running in production.

"The goal is to make it very simple for our customers to deploy a very large number of openSUSE Leap instances everywhere in the organization, and use for development or testing," Sheng Liang, SUSE's president of engineering and innovation, told ITPro Today. "As they get ready for mission critical production use, now they can sign up for a commercial relationship with SUSE.

"That's very different from how our competitors do it," he added. "They seem to really want to separate the open source binary and the commercial binary. We're kind of taking the opposite approach."

SLE and OpenSUSE Leap Compatibility in the Cloud

The compatibility can also be utilized in the cloud, as Amazon Web Services, Microsoft Azure and Google Cloud Platform have both SLE and openSUSE Leap available in their marketplaces.

"SUSE continues to drive innovation with Google Cloud in the open source community," Nelly Porter, group product manager at Google Cloud, said in a statement. "Now our customers can test their workloads using openSUSE Leap and then deploy a fully supported SUSE Linux Enterprise Confidential VM in production, thanks to the binary compatibility introduced with SLES 15 SP3. This capability, delivered through strong collaboration with OS partners, makes cloud adoption more cost effective for our customers."

On premises, this also means that if a non-critical workload suddenly becomes critical, the upgrade path only requires buying a license, with no need to install a new operating system.

As Gerald Pfeifer, SUSE's EMEA area CTO, told our sister site, Data Center Knowledge, when the binary compatibility in SUSE Linux Enterprise 15 SP3 was first announced in March: "It's like Harry Potter with a magic wand. Abracadabra and now you're SUSE Linux Enterprise."

SUSE's other community Linux distribution, openSUSE Tumbleweed, is a constantly updated rolling release and is not binary compatible with SLE.

"The performance enhancements and advanced security in SUSE Linux Enterprise are important for enterprises and cloud providers, where performance and time to value are critical to support the 'innovate anywhere' environments," Reser said.