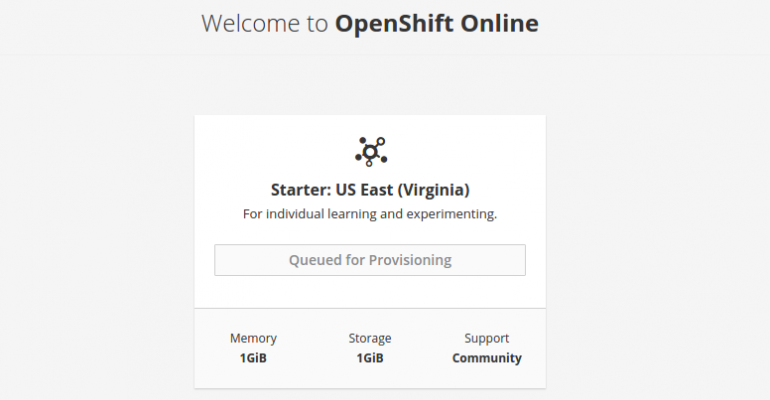 Last week Red Hat introduced its new and improved version of Red Hat OpenShift Online, its platform as a service cloud offering. It comes in a free or paid version, both hosted on AWS. If my experience is any indication, however, you might have to stand in line for a while in order to take the free version for a ride.

As the name implies, this offering is built on OpenShift, the company's container-based software deployment and management PaaS offering for private clouds. The online version isn't really intended for production use, although I understand the paid version can be used in production if desired. It's designed as a developers' platform, purposed to make it easy for devs to get their work ready for the cloud. It's been around since 2011 and during that time it's hosted more than three million applications.

"Application agility and, more broadly, digital transformation has become not just a goal, but a necessary change for many enterprises across the world thanks in no small part to rapidly changing customer needs and competitive demands," Ashesh Badani, Red Hat's vice president and general manager of OpenShift, explained in a statement. "Linux containers and cloud-native applications are helping to fuel these transformations. Red Hat OpenShift Online enables organizations to accelerate the path to production for their container-based applications by giving developers the ability to quickly begin new development projects and easily bring them into production in the enterprise."

Designed to enable developers to build cloud-native apps on a cloud-based container platform without having to worry about the complexity of provisioning, managing and scaling applications, developers can utilize it to focus on writing code, prototyping new features, or working on their next big idea without having to deal with the configuration constraints of a production platform.

It's a polyglot platform, which is show-off geek speak that means it understands more than a couple of languages. In this case, those languages include Java, Node.js, .NET, Ruby, Python, PHP and more. In addition, it offers optimized workflows to help configure and deploy applications on any given framework, such as Spring Boot, Eclipse Vert.x, Node.js and Red Hat JBoss Middleware, thereby helping developers start their projects easier and start coding faster.

Simplified deployment: One-click and "Git push" command deployment capabilities have been added for streamlining application provisioning and deployment for developers and sysadmins who don't need full control over deployment life-cycle.

Automatic scaling: Cloud elasticity is enabled through automatic application scaling, helping to remove the necessity for manual intervention when an increase in application load creates the need for more application instances.

Source-to-image builds: Using the source-to-image framework to build reproducible container images helps eliminate the need for developers to understand Docker, or create and manage Docker images. This helps reduce errors and enables programmers write applications in their languages of choice.

Middleware services: OpenShift Application Services makes Red Hat JBoss Middleware portfolio as cloud-based services on OpenShift available, which can be used to build applications, integrate with other systems, orchestrate using rules and processes, and then deploy across hybrid environments.

The free version of Red Hat OpenShift Online is called "Starter" and includes 1GB of memory and 1GB storage for unrestricted use. The paid version, predictably called "Pro," adds additional resources and includes free Basic Support for a limited period of time. Pro costs $25 per month per gigabyte of memory or storage.

If this sounds like just the thing, don't be in too big of a rush. There seems to be an availability problem -- at least as far as the free version is concerned. Earlier this week, when I opened an account to take Starter for a test drive, Red Hat listed the service as "over capacity" on both AWS US East and West. After completing registration, the account status became "Queued for Provisioning." Days later, I'm still in the queue.

An attempt to check the availability of the "Pro" version didn't pan out. Red Hat wanted more information up front than I was willing to give just to have a look at availability.