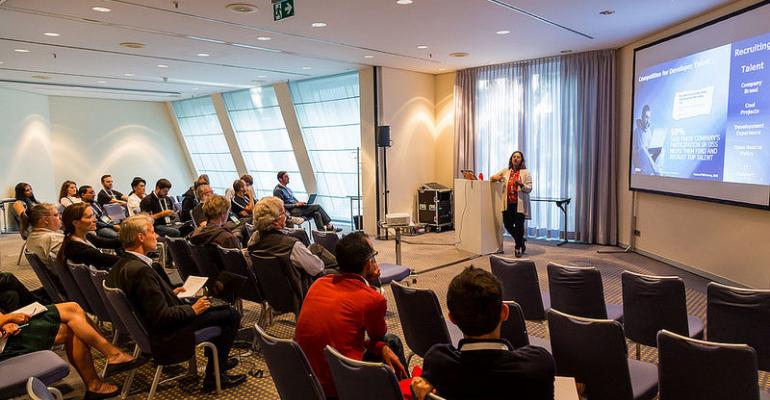 <p>Finding and keeping women and other minorities has been a problem in tech. The recent appointment of Nithya Ruff as an at-large director on the Linux Foundation&#39;s board should have a positive effect, even outside open source.</p>
Compute Engines>Linux

Finding and keeping women and other minorities has been a problem in tech. The recent appointment of Nithya Ruff as an at-large director on the Linux Foundation&#39;s board should have a positive effect, even outside open source.

It's been a couple of weeks since the nonprofit Linux Foundation announced the addition of Nithya Ruff, along with Erica Brescia and Jeff Garzik, to its board. Ruff comes to the table with a long list of accomplishments. For the past two years she's been at Western Digital, where she's currently the director of open source office and is also the founding president of the company's Women’s Innovation Network. During this same period, she's been a member of the OpenStack Diversity Working Group and Women of OpenStack.

Her career in tech began with a ten year stint at Kodak, where among other things, she was an IT Analyst. Since then, she's spent time at some well known tech firms, including SGI, Avaya and Intel. With her current employer, her duties include being an evangelist, meaning she can often be found speaking at various tech conferences, including the Linux Foundation hosted LinuxCon. Her appointment to the Linux Foundation board is as an at-large director, which puts her in a rather advantageous position, since she's not directly beholden to any of the Linux Foundation's corporate sponsors.

Earlier this week, I had the opportunity to spend some time on the phone with Ruff, who spoke from the Western Digital offices in Milpitas, California. We talked about her appointment to the board at the Linux Foundation and her thoughts on her involvement with the foundation.

IT Pro: How did you come to be considered for this appointment, and why do you think you were chosen?

Ruff: I've been working in open source since 1998 at Silicon Graphics. In fact, some of the first people I was working with open source on were people like Jeremy Allison and Dave McAllister. Since then I've been in and out of open source -- primarily more in than out -- in various capacities in the community and in companies doing project management on the open source side. I've never been a coder or a code contributor to open source, but I've been in various other functions like community manager, marketer, compliance and things of that sort.

Diversity is something that I've been working on for a very long time. I had been informally advising the Linux Foundation, sponsoring the Women In Open Source lunches at the foundation and working on how to structure that to be more fresh and to continue the conversation to change and reduce barriers to open source. I've talked on that subject in various places, valuing different types of contributions, such as marketing, documentation, quality, and how to reduce barriers to open source and open doors. So, with all that work, Jim invited me to join the foundation and asked, why don't you help us do this in a more structured and broad fashion? I was thrilled and excited to be invited to do that as a director at large, and that's how I became a part of it.

IT Pro: I think it's important to have some board members who aren't answerable to some of the large corporations who are deciding how Linux is going to go.

Ruff: Exactly. And my role at Western Digital has nothing to do with my role at the Linux Foundation. Even if I were to change companies, even if I were not part of a company that's a member of the foundation, my role would continue, because it's independent of the company that I work for.

IT Pro: And you're not being pushed by any handlers to support a particular agenda either?

Ruff: Not at all. In fact, it's the passion and the agenda that I already had that got me noted to be on the board. My feedback to the board was that I want to continue to do what I'm doing and I want to do it with the platform that the foundation provides, because it reaches a much broader audience in a more systematic way versus my working through just Women In Open Source, Women of OpenStack, or some of the smaller groups that I've been functioning with.

IT Pro: And diversity is something that tech in general -- including open source -- has been struggling to do something about.

Ruff: Absolutely. This is something that I've been doing inside Western Digital/Sandisk as well. This is not something that is new or just in open source for me. Three-and-a-half, four years ago, I and a bunch of others, from a grass roots perspective, went to the leadership team here and asked that we focus on diversity as a company, and measure and hold ourselves accountable for changing the numbers, changing the culture, changing our recruitment practices, et cetera. So this is something that I lead inside the company as well.

IT Pro: Do you think that the open source development community is getting more diverse?

Ruff: I'm seeing a little bit of change in the demographics. I'm seeing more women, contributing code and in other functions like community and documentation. For example, when I partnered to study what the percentage contributed to the Linux kernel was, we saw, I think, between nine and ten percent at the code level, the code review level and the mailing list level, and at OpenStack it was, I believe, between eleven and twelve percent. We looked at the trends from, I think, 2010 on, and it has been steadily climbing.

This is still a very low number. Fifty percent of the population is women, and in tech we have about 17 to 20 percent, depending on the company. When you look at open source it's even lower; it's at ten percent. It is low, but it's trending in the right direction.

IT Pro: It also seems to be a problem keeping women. A lot of women say they don't feel welcome and leave open source.

Ruff: Yes. I think it's a problem in tech in general and open source in particular. We are working on recruitment and pipeline development, which is good, but we have a leaky bucket. We have people leaving the organizations and a lot of that has to do with culture of inclusion. It's whether you feel welcome, how the interactions are, whether your contributions are valued, and whether you find others like you in the organization, because if you are alone you tend to feel like an odd duck, you feel isolated, you feel that you can't have your voice heard. But when the numbers increase, then more and more women feel comfortable to speak up and to change the culture of a group.

Some people are doing exceedingly well, like the Python organization, because right from the top, from the maintainer of the Python group to some of the women who are involved in the group, like Jessica McKellar, people are making a concerted effort to attract, keep, reward and recognize women and other contributors to Python.

IT Pro: It's not only women either. It's trying to attract and keep people from different cultures and from other minority groups.

Ruff: Absolutely. In fact, the model that the gender diversity effort has been using can easily be extended to other minorities in open source. Also, underprivileged people, if you will -- people who've been left out on the fringe. It's young people, it's black, hispanic, American Indian and people who've traditionally not been in tech.

One of the things I said at Grace Hopper when I spoke about opening doors in open source is it's also important because as industries get disrupted by software, if you're not part of it then you get left out on the sidelines and you get economically left out of what I called the gold rush of digital disruption. We need everyone to be able to participate, or at least have the opportunity to participate, in the disruption that's happening.

IT Pro: You talk about using the same model for other minority groups as with women. This makes sense. I think people from other minorities, perhaps, feel some of the same isolation.

Ruff: Absolutely. Including men. There are many men, who are either introverted, or who don't particularly care for some of the practices that happen in some online communities, who prefer a kinder, gentler kind of community or an inclusive community, who are are also leaving. Inclusion for me is a broader term than just women. It means that every person at the table feels valued, listened to, understood, and is able to contribute to the best of their abilities to the project.

IT Pro: It's a big wide world and everybody deserves a place at the table?

Ruff: Precisely. Someone recently said that even at the individual level, each of us is so different. True diversity is when each individual feels respected and heard. It's something that can be done; it's not rocket science. By shining a light on projects like Python which are doing it well, you can learn a lot of best practices to apply to other projects.

Automakers Race to the IoT and Manufacturing Edge
Jun 18, 2021