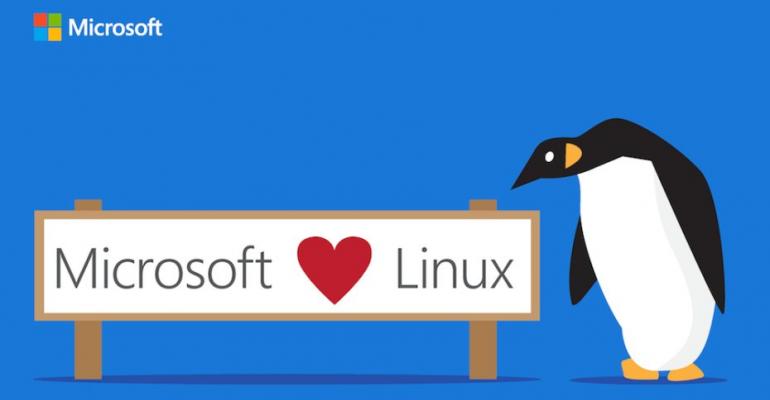 The foundation behind the open source operating system that Microsoft once tried to crush has welcomed Redmond into the fold as a Platinum Member.

The impossible has happened. Hell has evidently frozen over. This morning at Microsoft's Connect event in New York City, the company announced that it has joined the Linux Foundation as a top level platimum member. What's more, the foundation's executive director, Jim Zemlin, is greeting the company with open arms. This just goes to prove that the more things change, the more they...well, change.

Hyperbole aside, this isn't so surprising. Microsoft has been working with the foundation and Zemlin has been singing the praises of Microsoft at open source events for a long while now. So have Red Hat's CEO, Jim Whitehurst, and Mark Shuttleworth, Canonical/Ubuntu's head honcho, both of whom have been working closely with Microsoft on several major projects.

To this long time Linux user and open source advocate, however, this seems to be a sea change and the dawning of a new era. Microsoft now has a direct say in the future development of the little operating system that grew up to be big and bad.

Why would Microsoft do this? Because it needs Linux. It has bet its future on it.

For the privilege of being a platinum member, Microsoft shells out $500,000 per year. For that, the company gets to appoint one director to represent the company on the foundation's board. By comparison, the foundation's 19 gold members share a total of three directors between them, and the more than 200 silver members share a single director. This give Redmond -- and the 10 other platinum members -- considerable input into not only the future direction of the Linux operating system, but influence over other projects, such as Hyperledger, that are under the foundation's control.

Representing Microsoft on the Linux Foundation board will be John Gossman, who's been at Microsoft for 17 years and for the last four years has been the company's lead architect on Azure. He also serves on the Technical Oversight Board for the Open Container Initiative. At Azure, he's been at least partially responsible for helping Redmond develop and maintain relationships with Red Hat, Docker, Mesosphere, Canonical, Chef and Puppet.

It's not surprising that Redmond would appoint someone from Azure to represent them, as that's where most of the company's interest in Linux and open source lies. Currently, a third of all server instances on Azure are some flavor of Linux, a number that's believed to be rising. In addition, Gossman was doubtlessly chosen for his proven ability to nurture relationships with companies and organizations outside of Microsoft, which should come in handy in the foundation's boardroom.

While Microsoft's inclusion as a top level member of the Linux Foundation is sure to be met with more than a little grumbling from some in open source, especially advocates of FOSS and desktop Linux, the company should find immediate acceptance from enterprise open source companies, most of which already have close working relationships with Redmond. And because of the large number of jobs that Microsoft has created requiring open source skills, rank and file devs and DevOps should support today's news as well.

No matter how you look at it, it's a new day. The company which was once the biggest enemy of Linux and open source now has a seat at the table where much of the future of open source -- at least on the enterprise level -- is decided.

Microsoft also announced today that Google has joined the Microsoft founded .NET Foundation and that Redmond is working with Samsung on a project to enable .NET developers to build applications for Samsung devices.